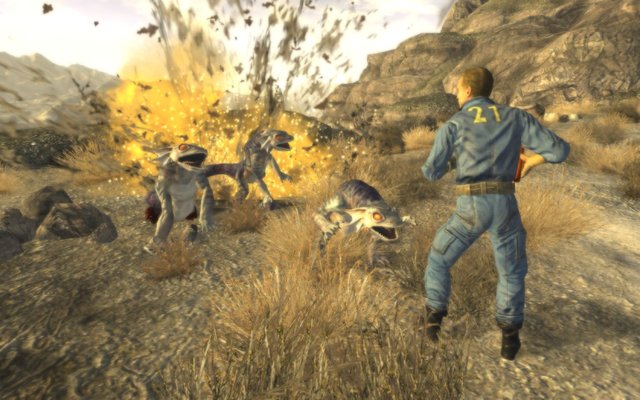 Starting straight off with the roll of the game’s opening credits, my sneak-peek session began at Fallout: New Vegas’s very first cinematic, in which our courier character gets shot in the face and is left for dead. Welcome to Sin City folks…

As a massive Fallout fan, I’ve been gagging to get my hands on some Fallout: New Vegas play time for what feels like an age now, and new developers Obsidian wisely keep the game’s early character creation moments to a minimum. No hour-long Vault-based pre-amble here, just a five minute Rorschach test that will define your character before you’re out and about exploring the Nevada wastes of New Vegas.

In the game’s lore, the capital city of Washington took the brunt of a nuclear attack on the States, whereas the West Coast didn’t do so badly. Radiation, monsters, mutations, corruption, desolation and destruction is all still apparent of course, but at least there are blue skies and birds in the air here. While still mostly displaying a muted colour palette, New Vegas opts for sandy yellows rather than concrete greys. Textures too look a little more detailed than the last Fallout offering, as far as rocks and dust can, anyway.

Our first mission introduces us to Sunny Smiles, a local gun for hire who shows off the slightly improved facial animations and tells us a local well has a gecko problem. This being the irradiated West Coast, these geckos are four-foot tall and hungry for blood. The VATs stat-based static targeting system returns, but you also get left-trigger “iron-sights” that make the standard shooting a little more dynamic. With this being an action-RPG your accuracy is still dependent upon skill levels of course, but it should make those more desperate fights when VATs isn’t an option a little more engaging. 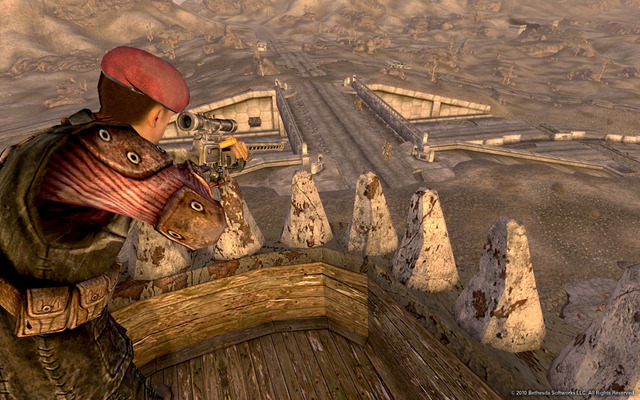 After clearing out the lizard infestation we were then whisked to the motel-settlement of Novac, where we took on a mission that shows Obsidian’s aim to make each side-quest more than just kill and collect tasks. Without spoiling the details, the town’s sniper (who makes Nevada’s “Dinky the Dinosaur” his camping spot) has had his wife go missing, and you’ve got to do some good old fashioned detective work to fish out the culprit. Depending on your “whodunnit” findings, right or wrong, you can alter the course of the game at this point, showing the branching quest lines that Obsidian have introduced both to the main and side missions. Either way, completing this particular mission made the sharpshooter our travelling buddy.

With our new companion in tow we got to see the improved companion commands in action. Rather than a cumbersome set of text-based instructions, you’ve now got a pop-up command wheel to exchange items, issue orders and select weaponry for each situation with your pal. It’s a tidy little interface, with your buddy handily offering a quick opinion should your requests not meet their preferred skills. Overall, companion AI has been improved, meaning you should be safe to leave them to their own devices rather than finding them dead half the time.

Our preview session jumped forward then to the famous Vegas strip itself. Neon lit and littered with casino’s, it’s a far cry from the wastes of Washington in Fallout 3. The “Rad Pack” show swings, scantily clad hookers tout their wares and drunken soldiers wobble from game house to gutter. Enter into the casinos and, after relinquishing your weapons, you’ll be able to trade in the game’s three currencies for chips and play some high stakes poker, slots and blackjack. Spend enough cash and you’ll become a house favourite, wined and dined by the establishment’s dodgy owners, but push your luck by winning too much and you may find your fair-weather friends will turn nasty on you. 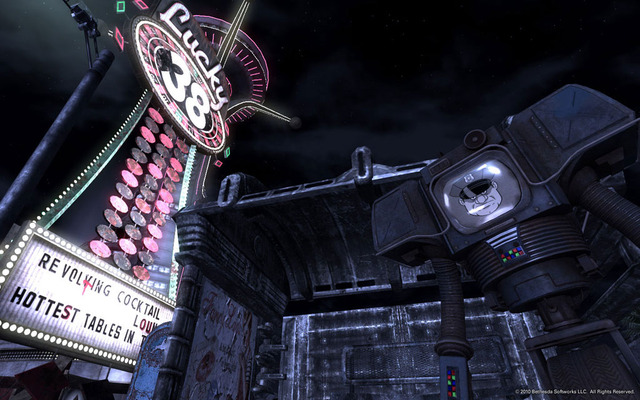 Based on my short time with Fallout: New Vegas, I’m happy to say that many of its predecessor’s minor failings have been ironed out and polished up. Visually it’s a little crisper than before, while the hardcore mode that requires constant micro-management of water, ammo and energy levels should keep long-time series fans from the franchise’s isometric days happy.

I do have two significant concerns however. Firstly, that the Vegas desert setting wont be quite as compelling as the landmark-rich, annihilated Washington. That gave Fallout 3 both a grand and sobering feel that at once encouraged both an emotional response and encouraged exploration of the map. Vegas, while prettier, fared better in the fictional nuclear war and as a result (to me at least) seems a little less interesting.

Secondly, it’s that the game engine is now really starting to show its age. The now nearly two-year old Fallout 3 was based on the even older Oblivion engine, first seen back in 2006. New Vegas again pretty much recycles that. Animations can be a bit wooden, particularly noticeable during conversations. In a world occupied by Mass Effect 2, Obsidian will have to dig deep to give their narrative elements the same cinematic punch.

Still, we’ve now got review code in hand and will be beavering away at the New Vegas secrets over the next week and more. We’ll have a full review then, so check back to Tech Digest for final thoughts soon.