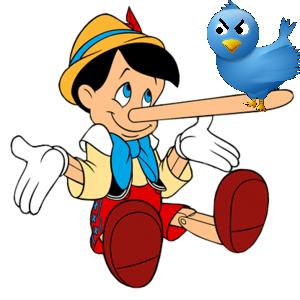 You may only have 140 characters to play with, but that doesn’t stop Twitter users from typing out tall tales. New research from insuarance firm Direct Line shows that people feel far more comfortable lying when using the micro-blogging paltform than if they were to say the same things during a face-to-face conversation.

The “Straight Talking Report” found that just 20% of the 2,012 people polled would be as honest on Twitter as they would be in the flesh.

Texting threw up similar figures, with only 17% of men and 21% of women claiming to be as truthful when using SMS messaging as they were in person.

“Modern technologies, such as smartphones, social networking and instant messaging have been hailed as innovations in the way people interact, removing obstacles to conversation and allowing for openness of discourse,” comments psychologist Glenn Wilson.

“However, we sometimes use these means of communication rather than a face-to-face encounter or a full conversation when we want to be untruthful, as it is easier to fib to someone when we don’t have to deal with their reactions or control our own body language.”