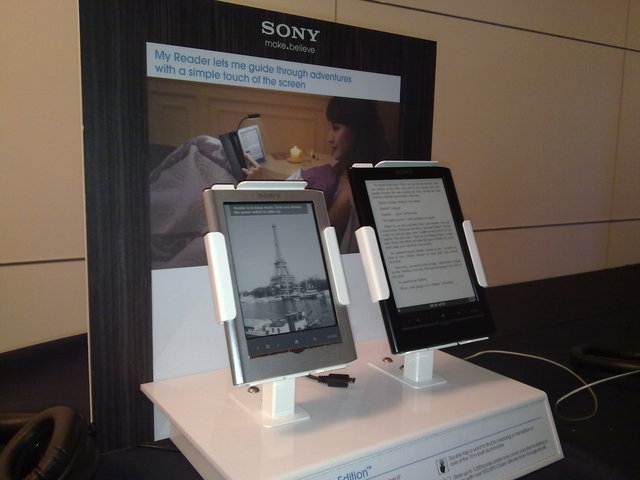 Sony have today been showing off their updated range of ereader devices. Both the Pocket and Touch Reader devices have been given a once-over, with revamped touchscreens on both models, as well as smaller and lighter builds. Tech Digest went hands-on with both devices this morning. Read on for our initial impressions, and scroll down for some photos of the gear.

Apart from the sizing differences (the Touch features a 6 inch display whilst the Pocket sports a 5 incher) there’s not too much to separate the two Readers. Both use e-ink optical touch screens at 800×600 resolutions, making it far easier to navigate your library than the button-heavy Kindle. Finger swipes are all that’s needed to turn pages and flick through settings, though a stylus is included with both the Touch and Pocket. Glare whilst reading in direct sunlight has also been reduced across both units, whilst contrast performance has also been improved, with sixteen levels of greyscale available.

Top of the list of new features is a rather nifty dictionary function. Double-tap any word on the devices and you’ll be brought straight to its Oxford English Dictionary definition, as well as translation dictionaries for 5 major European languages.

There’s also a new sketchbook application to go along with the note and highlighting functions. Though both the Touch and Reader are running on the same chip, we found the Touch to be a little bit more responsive when taking notes and sketching. Our input seemed instantaneous on the Touch, whilst there was a little lag when using the Pocket edition.

2GB of storage is on-board for each, enough for around 1,200 books, and the Touch edition also features memory expansion through Memory Card and SD, useful if you’re thinking of making heavy use of the MP3 and AAC playback features. PDF support has been improved with intelligent scaling now added. A single battery charge should last for around 3 weeks, or 10,000 page turns.

Sony have also smartly teamed up with Google to offer a link through the Reader website with which to download any number of the 500,000 Reader-compatible books that the search giants have digitised, giving every owner instant access to a vast personal library without having to spend a penny. Likewise, digital books can be downloaded from your local library through their websites, which will automatically return themselves once your loan period is up.

Lightweight, comfortable, and most importantly, very readable, the Readers are looking pretty good. Though the Kindle’s screen may still be a little less reflective, the touchscreen controls look set to put Sony’s gear at the top of the e-reader pile.

Due in shops on September 17th, pricing has yet to be confirmed, though you’re looking at around £100 for the Pocket and £150 roughly for the Touch. We’ll have a full review soon, but for now, feast your eyes on the hands-on pics below.