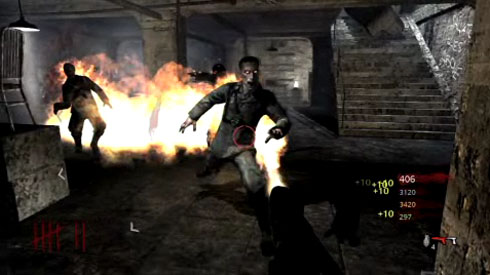 In what Activision are admitting is one of the worst kept secrets in gaming history, the company have confirmed that their forthcoming FPS blockbuster Call of Duty: Black Ops will once again have an undead-blasting zombie mode.

First featured in Call of Duty: World at War, that games “Nazi Zombie” mode quickly became a fan favourite, with up to 4 players working together to protect a ramshackle house from wave after wave of the shambling foes.

“Zombies have been such a hit with our community that we were committed to bringing brand new zombie experiences to Call of Duty: Black Ops,” says Treyarch Studio Head, Mark Lamia. “We’ve taken extra special care to retain the essential ingredients of our Zombie game, and have also crafted a nice surprise for the fans.”

Call of Duty: Black Ops will be hitting PCs and PS3, Wii and Xbox 360 consoles worldwide on the 9th November. We’re expecting a pretty major Black Ops announcement this coming Friday, so head back then to find out what else Treyarch have up their sleeves.