Name: Lara Croft and the Guardian of Light

For a series whose heroine is renowned for her flexibility, the Tomb Raider franchise has rigidly ploughed the same ground since Lara Croft first started hunting ancient artefacts way back in 1996. Crystal Dynamics took over from Core on development duties back in 2003, but it’s taken until now with the release of Lara Croft and the Guardian of Light for the titular adventurer to really spread her wings on this generation of consoles.

It’s quite the departure from previous instalments in the series. Naturally, Lara still spends the majority of her time traversing long-forgotten tombs, solving puzzles, avoiding traps and taking on the bad guys that lurk within. But rather than using a camera angle that hugs close to Lara’s best known assets, the camera sweeps high up for an isometric view of her surroundings. 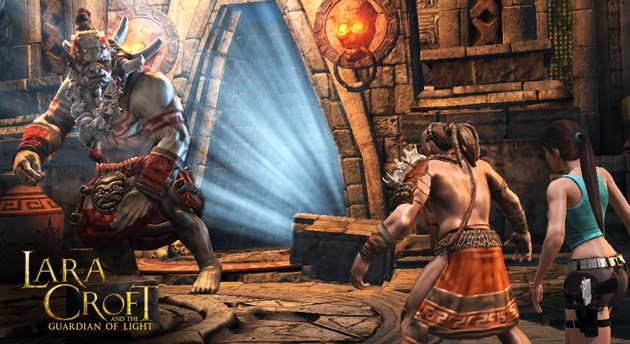 The reasoning for this is two fold. Firstly, this time around Lara has a pal along for the ride. With Lara on the hunt for the Mirror of Smoke deep in the South American jungle, it quickly falls into the hands of a mercenary called Vasco, who unleashes both the monstrous demi-god Xolotl and his minions, as well as a Mayan tribesman called Totec who is tasked with defending the artefact.

Totec then becomes a playable character in two player co-op, as well as offering the odd computer-controlled helping hand in single player modes. Co-op completely opens up the otherwise lonely Tomb Raider blueprint, with many puzzles requiring partners to work in sync to achieve their goals.

Totec’s introduction also leads into the second important reason for the shift in viewpoint; the game’s completely revamped combat system. Whereas in the past Lara would take on a handful of foes at once, her adventure in the Guardian of Light sees her take on hordes of beasties at the same time. It’s a far faster take on the action, more in-line with arcade twin-stick shooters than the considered gunplay of the other entries into the Tomb Raider series. The raised viewpoint allows for ample space for the bad guys to engulf the levels, as well as offering both players room to manoeuvre around the rabid enemies. Suffice to say, this increased focus on action makes Lara Croft and the Guardian of Light a far more intense adventure than anything Lara has faced in the past, and it’s all the better for it. 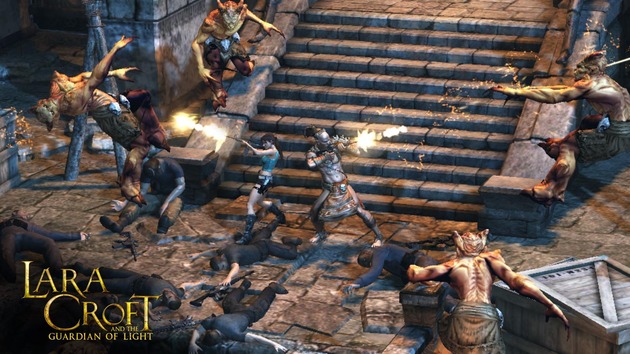 While puzzles still feature heavily, on the whole they’re a little less taxing than those that have gone before. If you’re a hardcore Tomb Raider fanatic and get a kick out of the more cerebral elements of the series however, don’t fret. Each level features optional challenge tombs that are designed to test both the mental and physical dexterity of those who enter. Make it past their Indiana Jones-style traps and pitfalls and you’ll be nicely rewarded with treasures. Treasures in Guardian of Light are also far more enticing than before, each offering some upgrade or character perk to aid you on your journey. Littered liberally around each location, they encourage you to explore the vast levels in search for every RPG-lite advancement they offer your character.

And just because those vast levels are squeezed into a downloadable title, don’t think they’re any less gorgeous than what we’ve come to expect from the exotic locations of the Tomb Raider games. At 2.2GB, it’s quite a hefty download, and from the looks of things most of this data has been packed into Guardian of Light’s excellent visuals. Tombs are detailed, derelict and unnervingly aged, while the shift in viewpoint is perfect for portraying the jaw-dropping sense of scale employed by many of the game’s challenging platform sequences and boss fights alike. 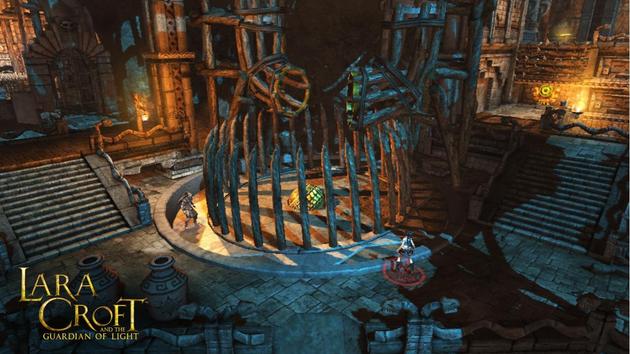 It’s worth noting however that whilst online co-op will be available at the September 28th launch of the PS3 and PC versions, those picking up Guardian of Light on the Xbox 360 this week will have to wait until the end of next month to get their hands on the online multiplayer components. Local “on-the-sofa” co-op is already present and should sate the appetite of those who insist on adventuring with a pal (which, in all fairness is probably the ideal way to experience Lara’s latest expedition). You do have to wonder how many people will still be up for playing through the game once more online though, considering many will have already finished the game during that lengthy interim period.

Whether you play through solo or with a pal, the fact remains that Lara Croft and the Guardian of Light is the finest outing the buxom heroine has had in quite some time. With a better balance between combat and exploration than in Lara’s recent outings, it does away with many of the slow and outdated conventions that have been holding the series back since it first flew the PS One coop. Lara Croft and the Guardian of Light is also a great example of the growing quality of downloadable titles; as with the recently released Limbo, it’d give any fully fledged retail release a run for their money in terms of graphics and gameplay, and is definitely worth grabbing by anyone remotely interested in adventure games.