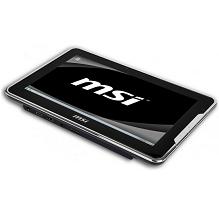 Though the Windows 7 tablet is still looking surprisingly barren, MSI at least have been hard at work with a device sporting Microsoft’s OS. Last seen in protoytpe form at the Computex conference, the MSI Windpad 100 has now had its design finalised. Scroll to the bottom of the post for all the official pics.

Expected to make its formal debut at Berlin’s IFA tech show, the Windpad 100 packs in a 1.66 Intel Atom processor, 2GB of RAM and a 32GB solid state storage drive.

There’s also a HDMI out connection, 2 USB ports, and MSI’s touch-friendly WindTouch overlay, as well as a proposed dock add-on.