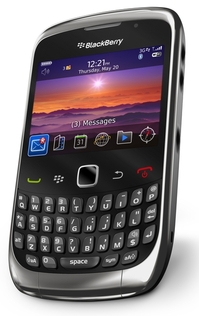 Hot on the heels of the recently revealed BlackBerry Torch 9800 smartphone comes the BlackBerry Curve 3G from RIM, the 9300 handset that’s been knocking around in spyshots and leaks for a few months now.

Though a 3.2MP camera had been thought to feature, RIM’s release reveals only a 2MP camera has made it to the final cut. Likewise, the OS shipping with the Curve 3G is only BlackBerry 5 OS, though the handset will be upgradeable to 6 OS a few months after launch.

“The majority of people in the worldwide mobile phone market have yet to buy their first smartphone and the BlackBerry Curve 3G is designed to provide an extremely attractive and accessible choice that will help convince many of them to make the leap,” said RIM CEO Mike Lazaridis, suggesting an affordable price bracket for the handset come its eventual release.

“The new BlackBerry Curve 3G is a perfect choice for happily busy people who are looking for a user-friendly 3G smartphone to help them make the most of their day and to stay connected with their friends, family and co-workers.”

No pricing or networks announced yet, but the Curve 3G should be in stores by the end of the month.