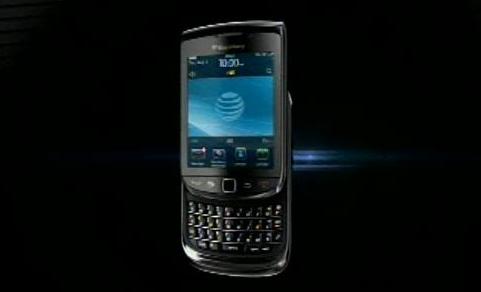 RIM have just revealed their latest smartphone handset, the BlackBerry Torch 9800. Calling it their “best BlackBerry ever”, it’s the QWERTY slider that we’ve seen knocking about in spy shots for a few months now. With it comes the official launch of the new BlackBerry 6 OS, too.

Sliding out to reveal a full QWERTY keyboard, Torch users can navigate the sleek new OS via either a capacitive touch screen (480 x 360 pixels, 3.2″) or trackpad.

The handset will also squeeze in a 5MP camera with autofocus, digital zoom, face recognition and what appears to be a Xenon flash. Elsewhere there is HSDPA support (3.6 Mbps), a 624 MHz processor, accelerometer, 512 MB Flash and 4GB onboard memory expandable to 32GB via microSD cards.

One particularly neat feature of the new BlackBerry 6 OS running on the Torch was it’s Universal Search function. Typing a word into the search box word bring up any apps or contacts related to what you search for. For instance, if you cant remember what menu sub-section your Wi-Fi settings are stored in, typing in “Wi-Fi settings” will bring up the settings menu for you to tweak, just as typing in “Joe Bloggs” would pull up Mr Bloggs’ contact details. It would also allow you to search for apps from RIM’s App World store.

RIM have also introduced a Universal Inbox, which serves to collect all your social networking feeds such as Twitter and Facebook, as well as email notifications and BlackBerry Messenger updates. Taping a specific update would let you respond directly from the Universal Inbox, or give you the option of opening up dedicated apps for each social service.

The media interface has also been overhauled, with swipe-able artwork across the board when browsing through your music. Most exciting though are the new wireless music syncing capabilities, allowing you to access and sync any music files stored on your PC. Even if you decide not to sync your entire library, the BlackBerry 6 OS will still grab all the necessary data to tag tracks for future syncing, should you get an urge to access other artists when you’re out and about.

RIM CEO Mike Lazaridis was on hand to talk through the development of the device. “We make sure that everything works right”, he said, specifically mentioning their antennas and transmitters, making an obvious knock towards Apple’s recent “Antennagate” woes.

The Torch 9800 will launch on August 12th on AT & T in the US. Looks like RIM are going out all guns blazing in the fight against Apple and Google’s Android handsets.