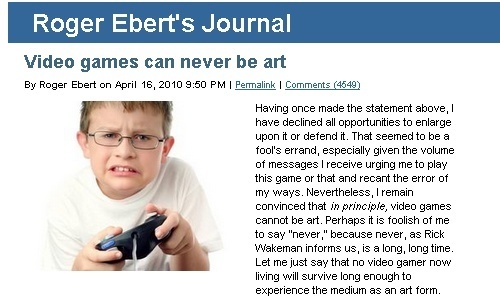 Sun Times critic Roger Ebert enraged the gaming community recently with his dismissive comments on the cultural importance of videogames, stating that they can not and will never be considered a true art form.

Today, in a massive 1,800 word apology, Ebert tried to placate the masses of gamers who attacked his critique as ill-informed and bandwagonesque.

Well, sort of at least.

You see, on the one hand Ebert is very gracious and humbled in his response. “I was a fool”, he concedes, continuing to say that “never is a very, very long time” for him to make such a blanket assumption on.

But then, the contradictions pipe in “I still believe [that gaming can never be considered art], but I should never have said so”. So it’s OK then Roger to think one thing and say another? Not the most solid show of integrity for someone who makes a living as a critic really, is it?