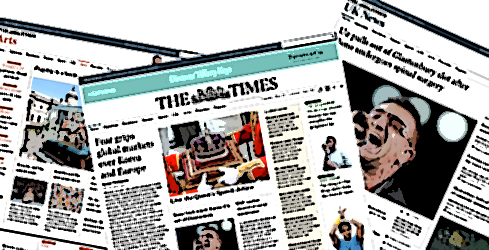 Paid content. It’s the future, or so Rupert Murdoch thinks, and he might well be right. Content is the lifeblood of the Internet — without it, it’d be little more than a place to chat and buy stuff.

Most people spend the majority of their time on the web consuming content. And they’ve been used to gorging on it for free, for a long time. The free content model has kind of worked. At least it did while we were enjoying the economic equivalent of a big fat money binge. But for a model to be truly viable it has to work in the bad times as well.

The main problem has been ad-revenue — turning UVs into £££s (or $$$s or €€€s or whatever). Since the dawn of online advertising there has been a bizarre attitude among advertisers who’ve stubbornly refused to treat online advertising with the same credence as print, and maybe, initially that conviction was right. Buying ad-space in a paper, buys with it the authority and credibility of the paper.

Since then though attitudes have changed, online has began acquire the same credence as print, and in many places has surpassed it. This is in part due to the nature of the medium itself. Whereas respect for print was based on a long-standing sense of authority and space — the news almost seemed like it belonged to the papers. The Internet’s authority comes from its inherent immediacy.

And yet, the advertisers’ attitude remain. It costs roughly eight times as much to buy ad-space in a paper with a circulation of 200,000 as opposed to a website with the same UVs, despite the former having the innate ability to direct traffic, and judge pick-up.

Nonetheless the problem remains — how do you to monitise content?

None of the advertising models work on a full-scale. Sure maybe Adsense will work for a golf blog, or Amazon Associates will work for a photography tips website, but neither are going to provide the type of long-term sustainable revenue streams larger, professional media networks recquire to build the premium content that they believe sets them apart.

That’s why some sites are making the first forays into the world of paid content. It’s a term we’re all used to, it’s been batted around since the Internet really got going, but what are the models — how could it really be done? We’re going to give you the quick low-down on the current models people are flapping their gums about.

1. The Paywall
In this instance, all the content belonging to a website is protected behind a paid-for login. The Times and The Times on Sunday are the newest iterations of this fairly conventional model, based on a print style subscription-esque policy. The only really variations come on the different levels of subscriptions, tailored to your content desires.
Positive: It works (though with varying success). 50% of the Wall Street Journal‘s revenue comes from subscriptions while Murdoch and industry experts were hopeful for a good pick-up when The Times disapeared behind it’s paywall.
Negative: It’s mainly how inflexible and badly implemented they are. The Times for example, say you’re not down with their politics coverage, but you like their Sports, well it’s looks like you won’t be able to pick and choose the content you want. It’s all or nothing. Journos at the New York Times successfully lobbied to bring down their paywall saying they felt removed from the broader public conversation. Traffic streams such as social bookmarking, search engines, and link swapping, are abandoned for cold hard cash.

2. The Payfence or Metred access
it’s like a paywall only it’s fence, you know, because you can see over it — metaphorically speaking. There is a certain amount of free content a month but once you’ve hit that wall, you gots to pay up — sucker. This can be done as a flat-rate or in terms of micropayments — little pocket-sized nuggets of cash you exchange for words about news.
Positive: It doesn’t whip you, lock, stock and barrel out of the social content shareosphere and your content still turns up in searches, thus your ad-revenues don’t take quite the beating they would with the paywall.
Negative: There isn’t the same take-up in terms of subscribers as the imperitive isn’t there. It’s a pain in the arse to implamenet and measure and is even harder now in terms of mobile internet and WiFi hot spots.

3. Micropayments
Consider micropayments the pay-as-you-go model of paid content. It’s ideal because it doesn’t take your site out of the shareosphere, nor does it hit your ads-revenue in the same wall as the payfence or paywall models do. Paypal is working on a universal model, and there is talking of browser integration, possibly with some sort of buy button and notifications as to your running content bill.
Positive: A universal standard model with browser integration and the ability to stratify content pricing that doesn’t take content out of the shareosphere or destroy ad-revenue in quite the same way as a paywall.
Negative: A poorly implemented, overpriced system has the potential to put people off paid content for ever. The thought of a content bill on top of already disproportional ISP bills isn’t going to be a vote winner.

4. Pay to talk
As pioneered by Emap, the pay-to-talk model, allows user to see news and articles for free while charging for use of web tools, forums, comments etc.. It has proved to be a viable model for niche sites and some academic databases though it would seem unlikely to work in a mainstream context.
Positive: Proved to work. Free news drives traffic to whom the premium features can be promoted. Has long-operated on specialist sites.
Negative: Adopters may be accused of pricing people out of the conversation — something that is seriously sociologically problematic, and really quite wrong.