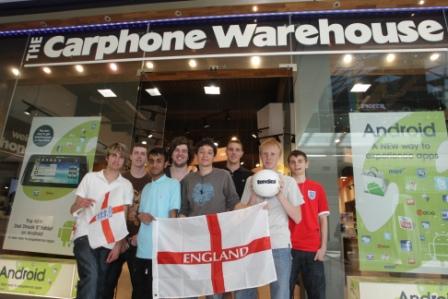 England have been defeated in the World Cup final by France, losing out by 3 goals to nil!

Well, sort of. No we haven’t hopped into the Tech Digest Delorean and jumped through time to July 11th’s final. That rather was the result of the Carphone Warehouse-sponsored Supreme Gamer tournament, which pitted 8 of the country’s best FIFA players to duke it out in a knock-out tournament of EA Sport’s FIFA World Cup South Africa 2010 game.

The final saw Robert Brewster from Huddersfield thrash Ipswich-based Chris Bullard 3-0 in a match-up between the French and English national teams.

Brewster, crowned Supreme Gamer, said: “I’m delighted to have won, especially as I was up against some of the best players in the country. I won the tournament with France, but am backing England to go all the way in the World Cup!”

He better be backing England! Otherwise we may have to request that Carphone Warehouse reclaim his pretty generous winnings; a 32″ HD TV, PS3 Slim, two games and a Logitech Squeezbox music streaming kit.

One thought on “France beat England in the World Cup final! Well, sort of…”