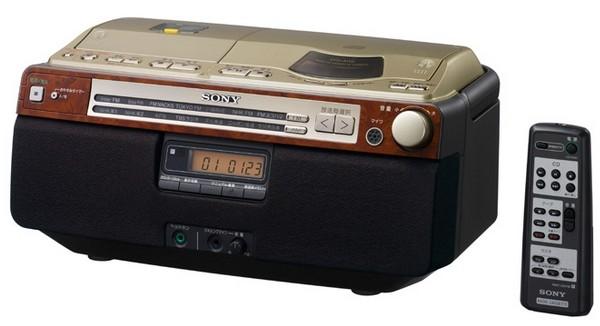 The floppy-disc may have gone the way of the Dodo, but there is one ageing technology that may yet prove to be as resilient as a cockroach; the cassette tape. Maybe it’s the sentimentality that we attach to our favourite music, or that Sony are keen to do right by format that filled their coffers back in the 1980’s and early 90’s. Whatever the reason, Sony are set to launch a new boom box this month, the CFD-A110.

Well, re-branded at least, if not strictly new. The eagle-eyed among you might recognise similarities to 2003’s CFD-A100TV, and barring the omission of an analogue TV band, it is indeed very similar. Playing back both CDs and cassettes, it features full range speakers, a microphone port for post-pub karaoke sessions and 14 AM/FM presets.

It’ll cost about £145 pounds when converted from Yen when it launches in Japan this June. No UK release planned yet though, so might be best to hit your local car-boot sale if you need a cassette player sharpish.