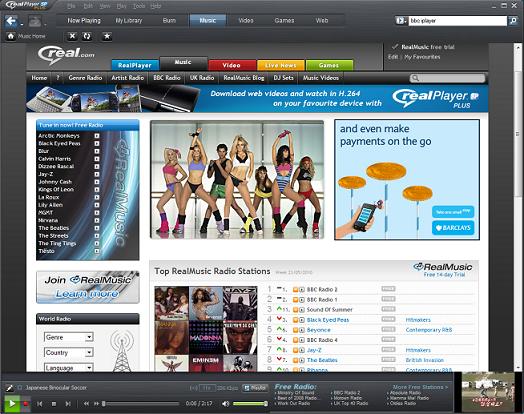 Once a leading light in media managing solutions, Real Networks began to build a bad reputation for themselves by bloating their RealPlayer software with third party add-ons and adverts. With rivals like iTunes offering more streamlined interfaces, RealPlayer’s star sharply fell. Realising the error of their ways, Real Networks are looking to stage a comeback, and their impressive RealPlayer SP software sees them come out fighting.

As well as offering a comprehensive and intuitive library function for managing your videos and mp3s, RealPlayer SP also offers some very cool features for fans of web video. Integrating with your web browser or using RealPlayer SP’s own built-in browser, the software lets you download and convert video from sites like YouTube with just a few clicks. Once you’ve installed RealPlayer SP, you’ll find a “Download This Video” button appear in your browser when you hover your mouse over video content, letting you save clips locally on your PC with a single click. 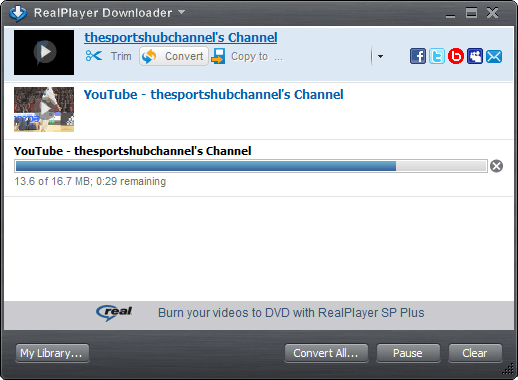 Once you’ve found a video you’re interested in, connect one of 27 supported devices (ranging from games consoles to mobile phones) and RealPlayer SP will convert the video into the appropriate file format and transfer it onto the device in the correct folder. Conversion is quick and trouble free, with the option to create a “custom device” if your gadget isn’t supported as one of the 27 pre-built profiles. RealPlayer SP has full Flash support, with the majority of web video downloadable by the software, though copyright-protected material is obviously not supported. While tech junkies may already have a video conversion solution, Real Network’s offering is simple enough for even novices to get stuck in straight away.

Real Networks have also recognised that we now live in an age where everyone insists on sharing content across multiple social networks. As a result, every downloaded video can be posted to sites including Twitter, Facebook and Myspace, or sent to friends via email. The software also includes some basic clip editing tools that, while no match for dedicated video editing software, will be handy for trimming away embarrassing parts of personal videos. 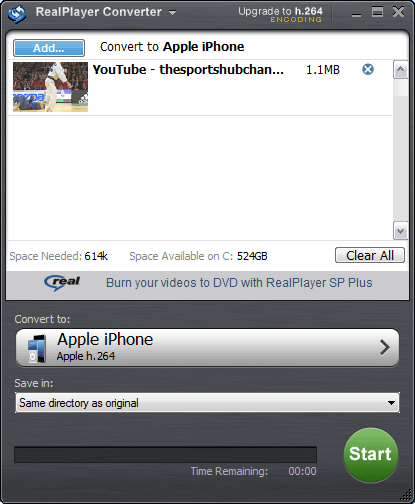 Upgrade to the premium version, RealPlayer SP Plus, and you’ll get a few more additions to the service. This includes support for H.264 conversion and increased control over the details of the conversion formats, DVD burning tools, CD burning up to 320Kbps, volume normalising for your mp3s, cross-fade mixing options and tools to help you transfer vinyl to digital music files. As with the rest of the package, these optional add-ons are implemented tidily, with the DVD burner in particular being very intuitive. However, apart from the H.264 converter, you’d expect many people will not need the other things thrown in with the premium version, or would at least already have other software installed to cover the functionality the upgrade adds. 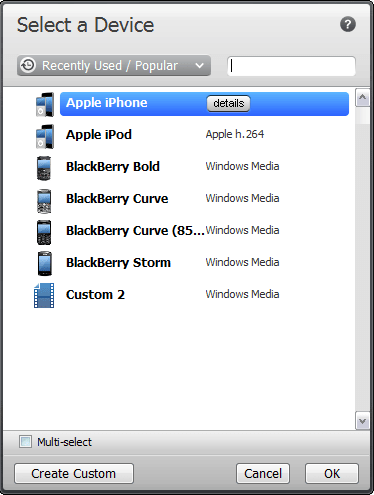 Though it’s a very strong offering overall, there are still a few annoyances with RealPlayer SP. I found too often that the program would not allow me to log into my premium account, with a “technical difficulties” pop-up appearing at least two out of three times. The list of supported handsets, while still a growing feature, is missing quite a few notable phones. HTC or Nokia owners for instance may find that they’ll need to do a bit more fiddling about than iPhone or Blackberry owners to get videos converted and transferred correctly onto their devices, delving into the “custom devices” menu to get the most out of the software. There is also a focus on the proprietary RealVideo standard rather than letting users convert to AVI or DivX for PC playback. It’s also arguable that Real Networks have been a little bit stingy by only allowing the H.264 converter to be used in the paid-for version, though other similar software packages also put a premium on this feature.

Still, there’s a lot to love about this RealPlayer reboot. Provided you have a compatible device the software makes converting and transferring media content incredibly easy, with a beautiful interface and tidy integration into your web browser. It may not do enough to convince you to splash out for the premium edition, but Real Networks have shown enough smarts here to coax lapsed users back into the fold.