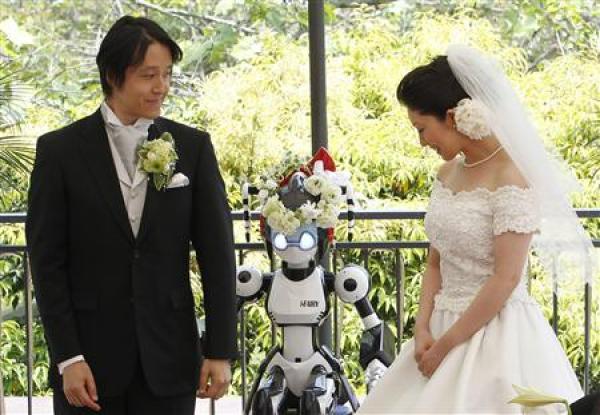 It was an i-fairytale day, like something out of an electric dream for Tokyo couple Tomohiro Shibata and Satoko Inoue, as they became the world’s first couple to take their marriage vows in front of a robot priest.

“Pastor” i-Fairy is a four-foot tall automaton, featuring flashing eyes and a plastic pigtail that make it look not unlike Johnny Five from the cult 80’s comedy Short Circuit.

With both newly-weds working within the robotics industry, the pair felt that a robot priest would be a fitting homage to the work that brought them together in the first place. Inoue is an employee of Kokoro Ltd, makers of the i-Fairy, with Shibata one of Kokoro’s clients.

“It’s true that robots are what caused us to first begin going out, and as suggested by my wife, we decided that we wanted to try this sort of wedding,” Shibata said at the bizarre ceremony.

“I always felt that robots would become more integrated into people’s everyday lives. This cute robot is part of my company, I decided that I would love to have it at my ceremony,” added bride Inoue.