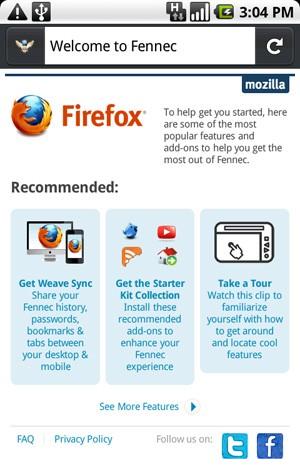 Mozilla’s Firefox browser, under the codename “Fennec“, has hit Android 2.0 phones and above in a “pre-alpha” build.

The company has stressed that the browser is currently only suitable for testing purposes, but that it should work on the Milestone/Droid and Nexus One for anyone eager to give it a spin.

“There also aren’t yet any automated nightly developer builds or automated updates to this build; it’s even more of a pre-nightly build (even earlier than pre-alpha),” said Mozilla’s Vladimir Vukićević on his blog. “But, it’s usable enough that we wanted to get some feedback on it as we continue to develop.”

While it may be usable on other handsets, Vukićević notes that as his testing with the build was only with the Nexus One and Motorola/Droid, he cant gaurantee the performance of the browser. “It’s a debug build, and we haven’t really done a lot of optimization yet…this could cause some problems with large pages, especially on low memory devices like the Droid,” he said.

Pick up the pre-alpha by heading to bit.ly/fennec-android on your phone. Make sure your settings allow non-marketplace apps to be installed too.