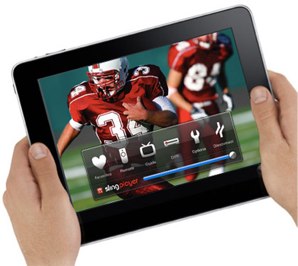 The Slingplayer app, currently available on the iPhone is coming to the iPad.

Yeah we know, the iPad isn’t exactly available just yet, but this is still good news. Slingplayer, though selling over here, from John Lewis if you’re interested, isn’t doing as great a business as one might expect, after its success stateside. That said, it is building a legion of dedicated fans willing it expound its many virtues.

From experience the Slingplayer is a superb product. It’s easily the most approachable domestic media streamer going. The iPhone app was hamstrung in the US when AT&T refused to let Slingplayer stream over their network, though due to its relatively low profile over here that wasn’t an issue. Unless you live in London, where streaming anything over 3G is actually impossible.

The new app will run on the Silverlight platform as opposed to crappy old WMV. It’s ace for video enthusiasts who might have been considering giving the iPad a miss owing to its lack of flash support.

We’re not even sure Flash is going to be such an issue once the iPad is released — what with the dedicated YouTube app and services such as Vimeo offering html 5 video players.

Though sadly Slingmedia have said the iPad app won’t be a launch date application.