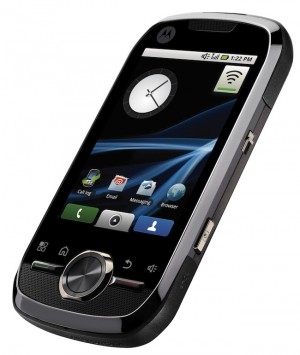 The Motorola i1 smartphone has been unveiled. Running on the Android platform, it’s the first smartphone using Google’s OS to feature Push-to-Talk, allowing the phone to be used like a walkie-talkie device.

The Motorola i1 is looking pretty rugged for a smartphone too. Its 3.1 inch HVGA capacitive touch screen is made of a special glass that reduces dust and dirt collecting on and beneath its surface. It’s also tested to military 810F standards, making it weather, shock, dust and waterproof.

On the underside is a 5 megapixel camera for video and still image capture, compatible with expandable memory using Micro SDHC cards.

While there doesn’t look to be a 3G connection in the Motorola i1, it will have Bluetooth and Wi-Fi connectivity. The lack of 3G is a shame, but understandable given the phone’s expected sub-$200 (£133) price tag.

More news on this soon.