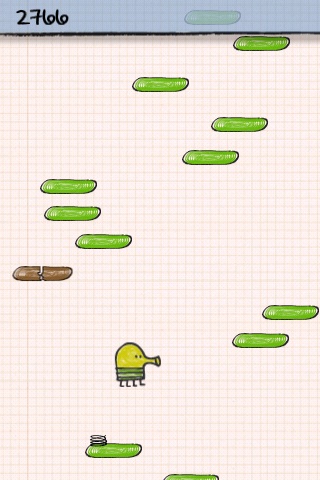 The App Store is awash with so many downloads these days that developers are finding it increasingly difficult to make any substantial money from. However, you’ll be pleased to hear that there are still some success stories to be had, as the charming platform game Doodle Jump has smashed the 3 million sales mark.

Developed by two brothers at Lima Sky, who were merely looking to make a game with just their own programming talents and little outside support, Doodle Jump has become massively popular, which in turn will have made the pair massively rich.

Selling for 99 cents, the app would have made something in the region of $2.9 million dollars in revenue since it launched in March 2009. With Apple‘s 30% cut of that coming to around $891,000, that leaves the Lima Sky brothers with $2.08 million in a single year. Keeping in mind that a further 8 of their games are regulalry featured content on the App Store, and you could happily bump that total up by a few hundred thousand dollars, I should imagine.

So the brothers have made 1.04 million bucks each in a single year from a single iPhone app game. My careers advisor was, obviously, rubbish.