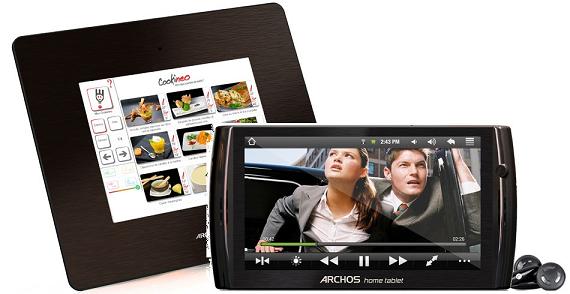 Archos have just announced the release of two new bits of tablet kit. The Archos 7 and 8 Home tablets will be available in April and May respectively, and will be priced somewhere around the wallet-friendly price of £135.

However, you’re not getting much for your money. Both running Android on a 600MHz ARM 9 processor, you shouldn’t be expecting any particularly silky web browsing here. Wi-Fi is built in, with a healthy seven hours of video playback and 44 hours of audio, but with only 2GB of integrated memory, don’t expect to be carrying large libraries of media around with you.

In terms of size, the Archos 7 is a slick 12mm and weighs only 350 grams. The Archos 8 is a bit crazier with a massive bezel, suggesting alternative uses as perhaps either a photo-frame or maybe even a kitchen-based reference device. In that sense, the Archos 8 would be pretty cool; it’d be nice to have a cheap web-tablet that could double up as a fridge magnet for some quick recipe tips.