I’ve long since resigned myself to the fact that I’ll probably never travel to another planet, never make friends with a cool alien being and never have my own robot servant. It used to keep my up at night, sweating my way through nightmares filled with Natalie Portman and Hayden Christensen frolicking in an otherworldly long-grass field, mocking my Earthly imprisonment. But that all changed thanks to the original Mass Effect; I could race across the galaxy in a starship, build a crew of inter-planetary bad-asses and even partake in a bit of cross-species love-making. It rocked. So obviously, expectations are remarkably high for Mass Effect 2. It’s a credit then to developers Bioware that Mass Effect 2 doesn’t just stand toe-to-toe with its predecessor, but jumps light-years ahead of it.

The plot picks up quite soon after the events of the first Mass Effect. Humanity is once again under attack, this time from a mysterious, insect-like foe named the Collectors, who have a penchant for, well, collecting. Collecting humans to be precise, and in their thousands. When the galaxy’s apparent protectors, the Council, fail to address the growing threat, our hero Commander Shepard joins forces with the seedy Cerberus organisation in an attempt to thwart this ancient foe. 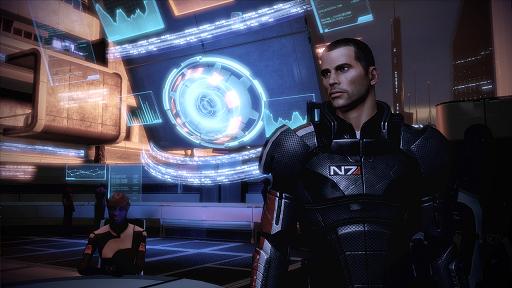 Though it’s a bit of a slow starter, it’s a dark, riveting story once it gets going. Bioware always come up trumps in the voice acting department, and Mass Effect 2 is no exception, with star turns from the likes of Martin Sheen and The Matrix’s Carrie-Anne Moss. It’s a good job too, as you spend a hell of a lot of time talking in this game. Ending conflicts and questing across the galaxy is as much about having the gift of the gab as it is the biggest guns. But that shouldn’t put you off at all: Mass Effect 2 features some of the most cinematic dialogue exchanges ever seen in a game. Conversations are fluid and full of branching choices, while detailed character models help believably deliver the powerful script. With the pull of the controller’s triggers, Shepard can now also interrupt key points in conversations with either positive or negative actions, sometimes to shocking ends. It’s a small but welcome interactive addition that helps further engross the player in the action on screen.

But not every problem can be solved with a little chat and a cup of Earl Grey. Nope, when the going gets tough, you’re gonna have to bring out the big guns. Literally. Many complained that the original Mass Effect’s combat was a little weak, if technically solid. No such qualms in Mass Effect 2; weapons pack a satisfying punch thanks in part to detailed damage modelling on enemies, cover-mechanics are more robust, and flipping through different ammo types is more intuitive thanks to a well implemented pop-up inventory wheel. There’s also the addition of heavy weapons, which are a total blast to play around with. Biotic powers get a much needed overhaul, with obvious improvements as they level up. There use results in dramatic and uber-cool effects on your foes, and it’s a joy to experiment with them by combining different powers together. Also, squad mates are way more intelligent this time around, making them useful additions to a battle rather than a shot-blocking hindrance. 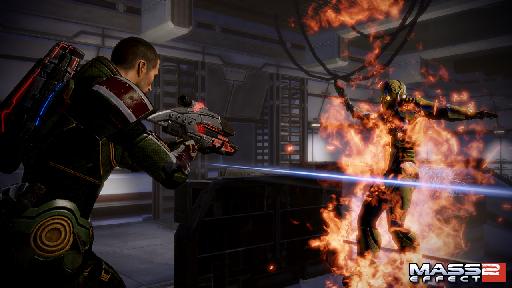 Part of what sold the original to me was the amazing graphics, and this sequel totally trumps its older brother. In keeping with the darker tone of the story this time around, the art direction has taken a decidedly grittier turn. Not that this means that the game is any less colourful or vibrant; it just all feels a little more natural and lived in. Bioware have certainly set phasers to stunning with this one (excuse the pun).

There are also a ton of smaller improvements here, doing away with some of the niggles from the first title in the series. Drops in the Mako vehicle onto cookie cutter planets have been completely done away with, with side-quests now getting unique locations all of their own. Menu micromanagement has been refined and scaled back, making for faster gameplay, while the inclusion of hacking mini-games makes what would otherwise be routine loot collection an exciting gameplay element all of its own. 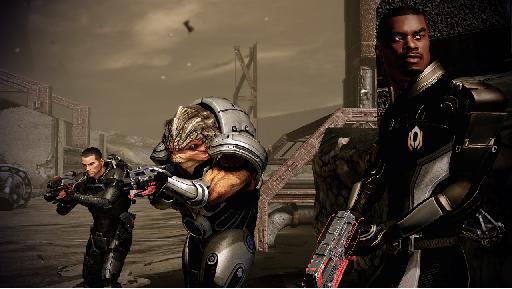 If I had any complaints, it’s that Mass Effect 2 now veers closer to the gunplay side of its apparent Action/RPG hybrid branding, with fewer class customisation options than before and less important gear and loot drops. The planet scanning mini-game used to find resources to upgrade your weapons is a bit of a chore too. But all in, given the cinematic nature of what’s on offer here, I’ll gladly sacrifice a bit of stat-tweaking in favour of blockbuster storytelling and set pieces.

Let’s not beat around the intergalactic bush here: Mass Effect 2 is incredible, as polished and exciting a game as the many teaser trailers and previews have suggested. It takes the shiny sci-fi glitz of the first game, irons out its few problems and wraps it all in a story as dark and magnificent as the classic Empire Strikes Back. It still has a few minor problems, but rightly earns its place among the stars.