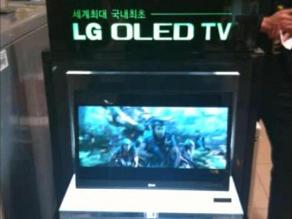 It’s been a long time coming, but LG have finally launched their first OLED TV. However, the TV at the moment is only available in Korea.

So far the TV is without a name, going under the fairly obvious moniker of LG OLED TV for the time being. At 15 inches in size it’s four inches larger than its Sony rival the XEL-1 OLED TV, and at the equivalent of £1,500 it’s also notably cheaper.

LG first disclosed their OLED TV plans at last years CES. While high production costs have so far put many manufacturers off of entering the Sony dominated OLED TV market, LG look set to put up a good fight, planning to have a 32 inch model ready before the year is out.

Keep an eye on Tech Digest for further announcements from LG during this weeks CES convention.