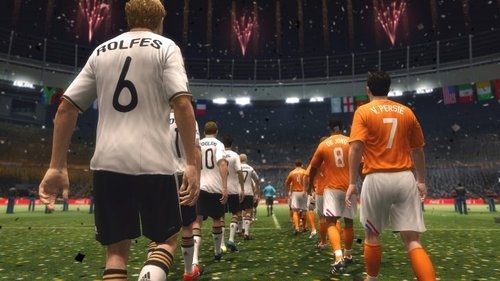 EA have confirmed today the release of FIFA World Cup 2010, their latest in the long running line of football sims. To be honest though, with the rate at which EA churn out FIFA titles, this was about as inevitable as the sun coming up tomorrow.

Still, it seems like quite a substantial update for what is essentially just a tournament edition. Speaking to Gamespot, EA’s Simon Humber revealed that this iteration will be even more like watching a real broadcast than ever before.

As well as a revamped pitch and player/manager models, there will now also be detailed fans with cameras, flag-forming seat cards, populated sideline benches and improved broadcast caption graphics.

As well as competing in a full World Cup tournament online, you’ll also be able to take any of the 199 teams that were in the qualifying stages and take them to South Africa.

Time to rip open that space-time continuum and get Ireland in the finals then, eh? FIFA World Cup 2010 will hit the Xbox 360, PS3 and Wii on April 27th.