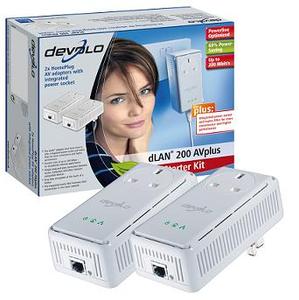 The world has become pretty comfortable with the idea of wireless internet, sending data over the air from wireless routers to all sorts of internet connected devices. It’s tidy and convenient, but can cause headaches when signal strength is poor and interference causes low connection speeds. And while a wired connection is stable and super-fast, running ugly-wiring from your router up walls around your house can be unsightly.

The alternative? Powerline networking. Put simply, plugging a powerline network adapter into your power sockets and connecting it to your router allows for data to be sent across your electrical wiring. Multiple adapters then let you access a connection comparable to a wired set-up via Ethernet without the need for lengthy cabling leading out of your router. It’s secure and fast, and Devolo’s dLAN 200 AVplus starter kit is one of the most simple powerline set-ups we’ve yet used.

As it’s not recommended to use extension plugs with powerline kit, one shortcoming can be a lack of plug sockets. The problem is nicely addressed with this Devolo two-pack, with both adapters including a pass-through socket on their backs. They also cleverly shut themselves down when your network is idle. It’s a green and money-saving feature that gets two-thumbs up.

Compared to our regular 802.11g wireless network connection, the Devolo gear gave our connection a significant boost. There are integrated mains filters in the adapters, which are compatible with transfer rates up to 200Mbit/s. If your wireless connection is divided by lots of walls, you’ll certainly get a significant speed increase using the Devolo powerline adapters. However, it’s worth noting that the gear can slow down if spread over large distances, but unless you live in an MTV Cribs style mansion, that’s not likely to really be an issue.

If it all sounds a bit technical, fear not. This is simple, plug-in-and play gear. Run an Ethernet cable from your router to an adapter, then another cable from an adapter plugged in elsewhere in your house to the device you want to get online with, hit the encryption button on each adapter, and you’re away. There’s some how-to guides and monitoring software packed in, but its all relatively straightforward. Keep in mind that there are only two adapters packed in here though; you’ll need to purchase additional ones for each separate device you want connected simultaneously.

Our only real concern with Devolo’s dLAN 200 AVplus starter kit is the actual size of the adapters themselves. They’re a bit clunky, and may not fit into a tight fitting gap or wall with high skirting boards.

Devolo’s dLAN 200 AVplus starter kit though remains a great way to get your home network simply and tidily up to speed. The average price of around £120 is a little steep perhaps, and the adapters themselves a little too bulky for our liking, but other than that it’s hard to argue with the gear’s many plus points.