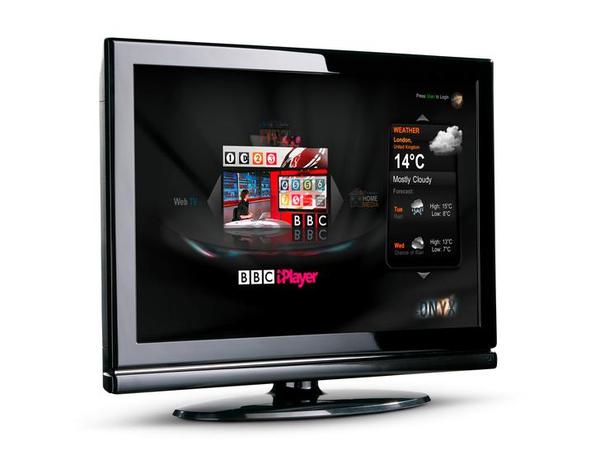 Brit based TV manufacturers Cello have made a bold move with their iViewer range. By being one of the earliest web-connected TVs and the first to have BBC’s iPlayer as a built-in widget, they are going where none of the big name brands have gone before. But has capitalising upon this brief window of opportunity left them flailing elsewhere with the set? Certainly, but the TV does still hold it’s own.

Sensibly, Cello have kept the aesthetics here rather simple. A glossy black frame about two thirds of an inch thick surrounds the screen, while a speaker bar about an inch in height lies just underneath. The screen can be wall mounted, but at 22″H (including base) x 31″W x 4″ D it’s rather chunky. I’d recommend using the supplied base stand, which is again glossy, black and discrete. Also, while the main manual supplied is perfectly acceptable, the visual guide thrown in is an absolute joke. It verges on Engrish and looks as though it was put together on MS Paint.

Keeping in mind this is at the budget end of the market for a full HD set (£499), the iViewer’s picture quality is reasonably good. 1080p playback of the “Che: Part One” Blu-ray over HDMI through a PS3 showed an acceptably sharp image with a good range of strong colours in brighter scenes, as you would expect with an LCD as opposed to a Plasma. Night scenes were less impressive: there was a fair amount of noise, black levels were respectable but hardly deep and response times suffered in fast moving shots. As a result of the noise and sluggish response times, it doesn’t score highly as a set for gaming, as proven by a quick session with “Call of Duty: Modern Warfare 2”. For the money you’re paying the image here holds up well, but don’t expect it to go troubling the big guns.

Likewise, the speakers aren’t the greatest. Hollow and echoey, it’s a muddled sound that has little in the way of bass, and poor definition between the mids and treble. Higher volumes sometimes caused a slight rattling too.

But, if you’ve been following this set, you’re likely already aware that this isn’t exactly a technophiles television. No, the iViewer’s trump card lies in its internet-connected capabilities, or more specifically its BBC iPlayer widget, where it does honestly shine.

Getting connected to the web is relatively simple, via either an optional USB Wi-Fi dongle or Ethernet cable. The input connections area on the back of the TV is far too cramped (especially as the USB Wi-Fi dongle is a bit of a sizey beast), but once you’re plugged in it’s just a matter of finding your network and entering your WEP key, text message style, with the remote control.

The iPlayer interface (and the TV’s web UI in general) was designed by Oregon Networks. They’ve done a great job. It’s a good looking UI across all of the web menus, with big icons simple and well defined for the casual user. There’s even a dedicated button on the remote for the iPlayer for easy-access to the service. Searching through the iPlayer catalogue will be easy for anyone remotely familiar with the web service. While playback controls can be a little clunky, visually the iPlayer footage scrubs up quite well on the larger screen, providing you don’t expect HD levels of clarity.

Web TV channels didn’t fair so well. There are 12 in all at present, including a fully-searchable YouTube, Jamie Oliver’s Ministry of Food and the Sesame Street podcast. Quality of content varies across each, both visually and in terms of entertainment value, and thanks to some unexplainable file error, I couldn’t access the Sesame Street one at all. Which was obviously heartbreaking. Also, the news widgets could do with a little more interactivity, and more options in terms of feed providers. 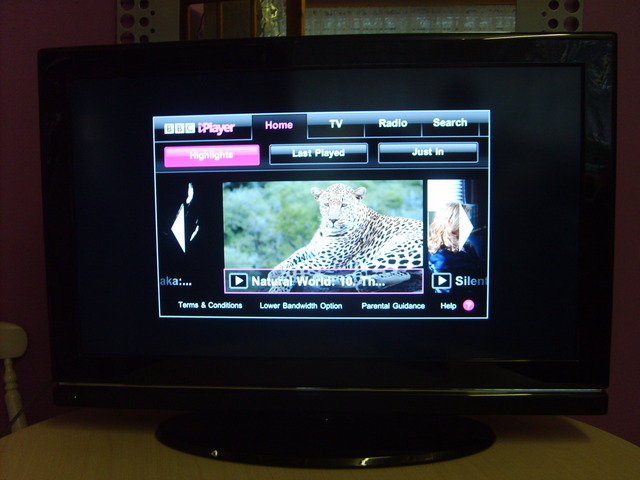 However, the DLNA home network access is strong and very accessible. Providing your PC is on and sharing allowed, you can access pictures, MP3s and a wide range of the most popular video files including AVI and WMV stored on your computer, though I couldn’t get high-def formats to work. In a nice touch, MP3s continue to play in the background whilst you browse other folders for content. It’s also worth noting that playback is possible from USB memory sticks, providing you can squeeze it in next to the dongle.

As is now standard, there is also an integrated TV tuner in the iViewer. Visually, broadcasts are good. There was a little noise and a few artefacts, but on the whole very watchable. The 7 day EPG however looks horrendous; from a technical standpoint it’s perfectly functional and easy to navigate, but fonts are jagged and the most lurid mix of sharp blues and yellows are used.

While it’s far from perfect, it’s nevertheless hard to dislike the iViewer. The picture and sound quality aren’t the best we’ve ever seen by a long shot, but it’s not epically bad. Just especially average. And while some aspects of the web service don’t work too well, the home networking and iPlayer are great, especially as this represents the first roll of the dice for the BBC service on TVs. As you’d expect from a product that’s currently a Marks and Spencer’s exclusive, it keeps it head down and gets the job done. And if you aren’t happy, that M&S guarantee will have you covered.

Pick up the IViewer here