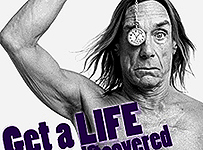 swiftcover, the insurance company that’s trying to be cool by using Iggy Pop in its adverts (despite the fact he would never be able to get insurance cover, ever), has commissioned a survey to find out what ‘Rocks’ and what ‘Sucks’. Oh dear.

What it has found is that despite wall-to-wall coverage of Twitter, nearly three-quarters (74%) of Brits think Facebook ‘rocks the most’ compared with its social media rival.

The online motor insurer also found that the iPhone ‘rocked the most’ with 68% of votes compared to 32% who voted for the Blackberry, whilst in terms of IT brands Microsoft still rules over Apple with 66% saying that Microsoft ‘rocks’.

Tina Shortle, marketing director of swiftcover.com, says: “Our poll shows that 2009 really was the year that social media grabbed the public’s imagination, from Facebook and Twitter through to the great social networking gizmos like the iPhone.”

The poll was conducted among 2016 people.

swiftcover.com’s Rocks and Sucks – What rocked?