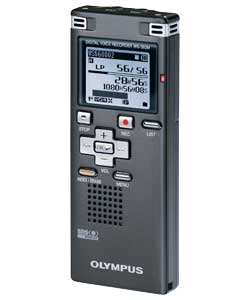 However if you want to use a voice recorder regularly, or need to record long speeches then your phone probably won’t cut it. It might not have enough storage and if you record for too long you won’t have enough battery for other things.

Which is why there is still a strong market for devices like the Olympus WS-560M. Olympus has been making voice recorders for ages and these days is a clear leader in the market. These are nearly always bought by students and journalists but there are other professions for whom it makes sense to own one.

I have to say that voice recorders have come a long way since I last played with one a few years ago. The WS-560M is ultra easy to use and has lots of very sensible features. The big step up for me is the inclusion of a flip out USB which means that you can hook the device up to your PC and not have to worry about finding the lead. The WS-560M also uses the USB as a charger too which means another lead you don’t have to worry about.

Olympus has also kept the controls on the device very simple. There are nine buttons which are clearly marked and if you just want the basics and only want to edit or splice audio together it really is a case of record, stop and play with the sound coming out of the unit’s reasonably good little speaker.

Other things we liked include storage levels of four Gigabytes, which might not sound like a huge amount but in reality grabs you more than 1000 hours in long play mode, though considerably less if you choose Stereo XQ which is the highest quality option. Use a higher mode and the Windows Media Audio files do sounds great.

One last little bonus is that Olympus has thrown in MP3 playback. So you can have a few of your own tunes on the device and then listen to them either via the speaker or though earphones.

Well it is hard to find fault with this product. If I was being picky I’d say that the screen is a little on the small side, but then it didn’t really present a problem.

Coming in at over £100 this is still a little pricey for a voice recorder but if you want one i that is reliable delivers good quality results and is blindingly simple to use look no further.