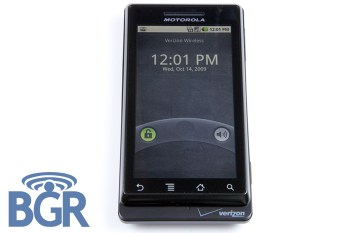 Motorola’s Android based smartphone, the “Droid”, edges ever closer to the shops.

It’s been making waves for a few months now and this latest batch of photos and details suggest the phone may be on its way sooner than anticipated.

Over at The Boy Genius Report they’ve had some hands on time with the handset and seem suitably impressed. Running Android 2.0, its TI OMAP3430 processor makes it incredibly fast compared to other Android devices.

The Motorola Droid will also feature a pretty nifty 3.7 inch 854×480 touch screen display, which will be great for checking out photos snapped with the handset’s 5 megapixel autofocus camera.

Only a touch thicker than the iPhone 3GS, it is great to see the screen slide away to reveal a decent sized QWERTY keyboard, though the design on show was yet to be finalised.

The device will also ship with a cradle charger, turning the Droid into a “multi-media station” on your desktop, which given the excellent display could be genuinely useful.

It may not be quite in its final retail state yet, but the Droid still manages to impress, with these latest details causing smartphone fans the world over to drool.