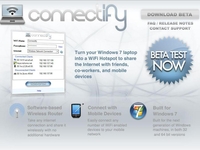 Any PC running Windows 7 can now be turned into a Wi-Fi hotspot thanks to a new application called Connectify.

Such “Virtual Wi-Fi” functionality had been planned as a big feature in Windows 7, but was apparently cut short in 2006, according to TechWorld.

You can pick up a free beta version of Connectify here.