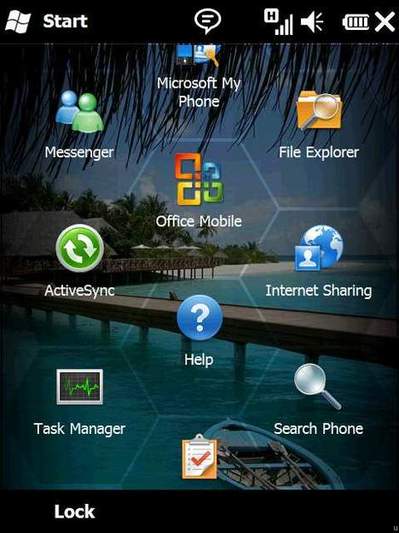 Big day for Microsoft today as it prepares to announce new Windows phones at 11am today at London’s Centre Point. Last week we reported on its supposed iPhone killer, the ‘pink phone‘. Today it announces its first smart phones with Windows Mobile 6.5.

Although precise handset details are still a closely guarded secret we have found out a little bit about new integration services for the Windows phones which will be announced. These include My Phone and Marketplace. My Phone lets users back up and manage their photos and apps for free as well as other content from their phone including contacts, appointments and text messages directly onto their PC.

People can also publish their photos from the My Phone website or the phone directly to Windows Live, Facebook, My Space and Flickr as part of the free service. It’s also possible to go online to map the last known location of the phone from when it was last synchronised.

There will also be a premium My Phone package which will immediately locate a phone’s current location on a map, will remotely lock a phone and will post an ‘if found’ message to its screen. One ‘Mission Impossible’ type feature is an erase function which will automatically delete all personal data from the phone if it falls into ‘enemy hands’. Initially these premium services will only be available in the US but they will come to Europe in the ‘near future’.

Also just announced is Windows Marketplace for Mobile, a library of business and leisure apps including games of course. Wonder where they got that idea from? Microsoft is currently working with 731 developers worldwide to include over 200 mobile applications in the Windows Marketplace for Mobile. These include Facebook and MySpace apps as well as games titles such as Revenge of the Fallen, Sudoku, Transformers and the Pac Man series.

Windows Mobile once had a strong position in the smartphone market, but this has fallen sharply in recent years with increased competition from RIM (Blackberry) and Apple. According to research from Gartner, Windows Mobile’s share of the global smartphone market was down to 9 percent in the second quarter of 2009, while Apple held 13.3 percent and RIM carried 18.7 percent (Nokia’s Symbian platform dominates the global market with a 45 percent market share.)

However Microsoft will have been cheered by a report yesterday from industry analysts iSuppli which predicted that Microsoft will reach the number two spot in the smart phone market in 2013 with over a 15 per cent market share.