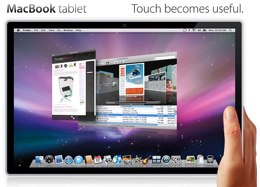 After the fairly low-key iPod launch a few months back Steve Jobs certainly needs something a bit meaty to announce to the Apple fan boys next year. For a while now the hot money has been on the introduction of the long-promised Apple Tablet, and that money looks even hotter now.

The latest confirmation that Apple will be delivering an iTablet sometime very soon comes from respected online industry site DigiTimes. Its sources are saying that Foxconn Electronics, makers of the iPhone and the iPod, will be the manufacturing partner for a tablet PC device and it will go on sale in the first quarter of 2010. Apparently initial shipments will be in the 300,000-400,000 range, which sounds like fairly low number to me.

It will apparently sports a 10.7inch screen (other sources have predicted the screen will be this size too). Overall we expect a ramped up version of the iPod Touch with ultra fast web browsing, a long battery life, multimedia facilities and compatibility with home focused (TV remote control) apps.

One thought on “Apple's Tablet PC (iTablet?) coming in February?”