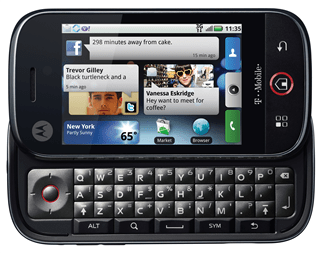 Motorola has finally taken the wraps of its first ever Google Android powered smartphone. The Motorola Cliq, which will be rechristened the Dext in Europe and sold in the UK by Orange, teams the innovative Google operating system up with a new user interface Motorola calls Motoblur. Designed to differentiate the device from other smartphones Motoblur synchronises contacts, posts, messages and photos from sources such as Facebook, MySpace, Twitter, email and LastFM – and automatically delivers it to the device’s home screen. It is not unlike a similar feature which was recently unveiled on HTC Hero.

The device itself, which was also known as MB-200, has the QWERTY keypad that many Android devices feature, but also includes high-end facilities such as HSDPA, Wi-Fi, a five mega pixel camera, GPS and a 3.5mm headphone socket. It will be available in both black and white.
Some mobile analysts believe the device is a watershed for the beleaguered US mobile firm. Some have even suggested that the company would pull out of the mobile market is it got as frosty reaction to the new handset.

The good news for the company is that at the time of writing an hour or so after the announcement its shares were up around 2%. Both Apple and Palm’s shares feel yesterday after their product announcements.