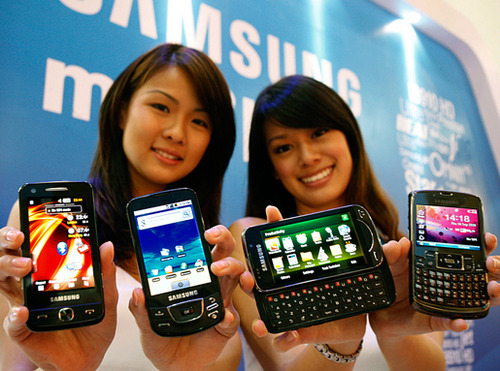 The clock may be ticking on Samsung’s Unpacked global launch today but it looks like the cat’s out of the bag already. The Samsung Omnia Pro B7610 has appeared on their official Korean website – in Korean, before you look

It’s got a 3.5-inch OLED, of the kind LG feels is too expensive, with an impressive 800 x 480 resolution. It runs Windows Mobile 6.1 (soon with 6.5), it’s got a 5-megapixel camera and, apparently, comes in both Pro and Media specific interfaces whatever that turns out to mean.

There’s all the usual Blueteeth and Wi-Fi, a slide-out QWERTY and expandable internal storage of 1GB. Not bad at all. In fact, it appears to be what we called the Louvre a few days ago.

The nice ladies also appear to be holding a Pixon12, which we know something about already too, and also the 3.2-inch, Android OS, Samsung i7500 with the 5-megapixel camera and staggering 32GB of internal memory. Eat your heart out N97.

You’d have to presume it’s the same bunch that’s about to touch down all over the world. Speaking of which, that gives me around 45 minutes to get myself down to Battersea to find out. See you down there.