Feeling like a bit of a pro on Day 5 of Headphones week, I’m sitting here listening to the TwistJax AcousticSteels looking for a weak spot in the audio. There isn’t one. I thought the midrange was dodgy at first but that was just Dire Straits.

But I wouldn’t say they were balanced either. They don’t deliver an all round performance and I don’t think they’re trying to. They’re having fun with you, and they’re game is bass.

From the look of the things down to how they sound, it’s like you’re outside the Ministry of Sound circa 1993 listening to some heavy house beats through the open window of a blacked out XR2 with a UV light underneath. Your ears even slightly vibrate as your whole body did back then along with any glass for 50 metres around. I think they’ve done it on purpose too.

The buds don’t mould to your ears like the Shure SE115s and there’s no real attempt to isolate or cancel ambient sounds. The TwistJax go for beating it with raw power instead. The sound stays true even at high volumes and, with one driver positioned deep in your drum and the the other just inside your pinna, it grabs anything else by the throat and throws it to the curb like a black bomber jacketed bouncer.

Normal pop and classical still sound good but the bass is where it’s at and breaking out my hip-hop and drum & bass just added to the fun of the Atomic Floyd experience.

They actually look like record decks. Technics. I’m sure they’ve been designed that way. The steel hatching on the stems of the buds are reminiscent of DJ cables plugged into mixers and they’re actually heavy to hold. They won’t tire your ears or anything but you’re not going to forget you’ve got them in. They don’t want you to.

I’m not overly impressed by the cabling. They’ve gone for that material insulation rather than rubber. I don’t know what it is. Nylon or something? It may look good but it does have a tendancy to curl up a bit and generally have a mind of its own. You have to forgive it though. They just wouldn’t look as good otherwise. Perhaps they could be a little thicker. Not sure how long they’re going to last.

The buds themselves are beautifully crafted and, although the metal is a little cold when you put it in your ears, they’re hot by the time you take them out, and there’s something satisfying about that. It’s like you’ve nearly melted them because you rock so much. 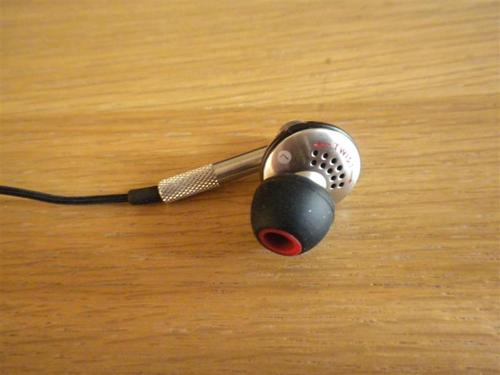 Probably the only part of the TwistJax that I’m not too sure about is the whole twisting part that gives them their name. Basically, the arm and the saucer end of the bud swivel independently of one another. The idea is that because of that, they’ll fit any ear shape. Not convinced. Gimmick is the word that springs to mind.

From the off, it feels like you’ve got something really special. They arrive like a large silver packet of crisps with ATOMIC FLOYD emblazoned on the front, or more flattering I could describe then as the kind of pouches astronauts rip open on the space shuttle when they want one of their dried food suppliements, but I think I’m more excited by the idea of a large packet of silver crisps personally, so that’s what I’ll stick with.

The box itself is fairly smart and comes with some slightly comedy looking aeroplane emergency card type instructions on the back. Once inside, it’s all pretty standard. Two spare sets of buds, tough leather carry pouch, adaptor and gold phono jack included. You’ll probably throw most of it away and I wouldn’t worry about that. The experience is opening it in the first place. Then let the music take over.

Theses things aren’t for everyone. They’re showy and you’re spending a lot of your £129.99 on looks. But I happen to like those looks and I like the sound too. If you used to have a car with a UV light and blacked out glass and now seem to drive a Montego with screaming kids, I’d say it was time invest.

More from Headphones week over here with Day 1 over here, Day 2 just beyond, Day 3 after that and Day 4 bringing up the rear.