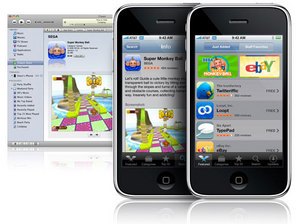 Lovers of large numbers and Apple shareholders will be getting together this Friday to celebrate the App Store’s 1,000,000,000th download. How does Apple know that it’ll hit a million on Friday? Maths and stuff, I assume.

If you change the date on your computer to the 24th April and visit the Apple homepage, then you’ll see a massive graphic saying: “Thanks a billion. Over 1 billion downloads in just nine months.” Or you could earlier, I can’t seem to reproduce it now, so maybe they’ve fixed the exploit that lets users display it.

It does beg the question: “WTF?”. A year ago, mobile apps were a murky world full of incompatibilities and random crashing. Apple has managed to do to the world of mobile applications what it did to MP3 players and arguably the smartphone market. It begs the question of where it’ll turn its attention to next. My guess? Tablet PCs.