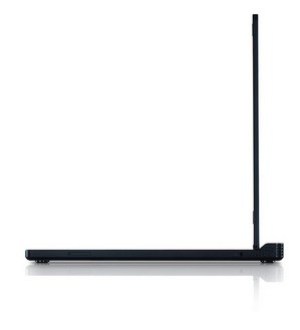 Prepare yourself for some sort of Dell orgasm because the Adamo is available today. The Texas company has launched two versions and two colours of their take on the MacBook Air and they’re using Barry White levels of sexual suggestion to get you to part with your money.

Just take a look at the dedicated Adamo site to see it draped in models and accompanied by some let’s-go-back-to-mine-for-a-coffee music; oh, I seem to have missed my train we’d better shag vigorously instead; by the way, nice laptop you’ve got there.

Like the Mac Air, there’s no optical drive but it does trump Apple with the addition of a RJ-45 Ethernet port along with two USBs, an eSata/USB combo, an HDMI, Bluetooth 2.1 and some draft-N wireless action. Plus there’s an option of mobile broadband which pretty much gives you the full set.

On the inside, you either have the choice of the lower end Admire or the full whack Desire models with, presumably, Lust, Consumation and Afterglow versions to come at a later date.

They both run a 64-bit version of Vista and feature 1.3-megapixel cameras built into the usual place. There’s also some external kit to go with it in the way of optical drives and storage but that rather defeats the object.

What you may need to know is that, though the 4-5 hour battery is a nice, new bit of Li-polymer tech, it is built-in and requires posting back to change. No word on the cost of that.

Now, I can sit here and rib this machine and the way it’s brought to market but the fact is it looks lovely and I’d sell my remaining grandma for one. Actually, scratch that. I wouldn’t. She’s ace, but I’d sell someone else’s grandma for one, no matter how many they have left.

However, bear in mind that even the Admire is considerably more expensive than the low end £1,279 MacBook Air and, for your money, you’re not even getting the benefit of all that Apple offers in both name and stability. I’m not saying I’d buy an Air instead but worth thinking about.

Availble to all those still in gainful employment in either Onyx or Pearl. I’ll spare you the innuendo.