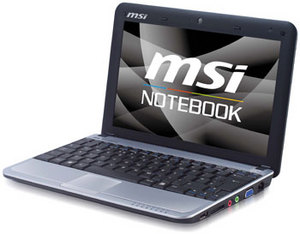 There are plenty of things to praise about netbooks: their simplicity, their small form and their portability to name but a few. Battery capacity is conspicuously absent from this list though. To keep things small, battery life has to be scaled back – it’s all a vital sacrifice. MSI’s latest addition to the Wind family looks set to change this though, and the U110 ECO promises an impressive 9 hours of uptime from a single charge.

Whether or not these are the kind of results we’d see in everyday use remains to be seen as most manufacturers are generous in their estimates to say the least, but even if this is exaggerated by 2-3 hours, this is still an impressive increase. Current netbooks’ batteries typically last between 2 and 5 hours, and early eeePCs like mine have been consciously underclocked in order to slow the drain.

In terms of specs it’s a fairly standard fare by today’s standards, proving once again that I really should have waited rather than buying an early model. It runs on XP, has 1gb of RAM and a hard drive offering between 80 and 160gb of space depending on the model. We’re looking at a 1.6Ghz Atom Z530 processor which is optimised for battery savings.

There’s one thing that bothers me about this: do people actually use netbooks for such extended periods? Don’t get me wrong, longer battery life is always a good thing, but anyone who is frustrated that their netbook doesn’t last a whole day is probably using the wrong computer for them.