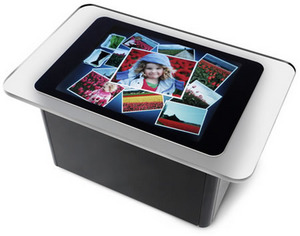 I’ve just be blown away by the Microsoft Surface. If there’s one take home message from the event I went to, along with just about every other UK tech head, it’s that these things have to be seen to be believed.

Steve Ballmer’s comments about having one in every home by such and such a futuristic year didn’t exactly help their good name, along with their £8,500 price tag, but then Microsoft is only really looking at commercial sales just now with half an eye on integrating one of these things into a kitchen table or worksurface in a few year’s time.

So, what about the hardware itself? Well, there was a certain assumption in the air this afternoon at the Haymarket Hotel that everyone knew all about what the Surface is made of, but it sort of dripped out question by question that nobody actually had a clue.

As it turns out, the guts of the PC within are pretty simple. It runs Vista on a fairly standard CPU with 2GB of RAM and it’s really only the screen itself that’s any different. In fact, most people’s laptops are probably more powerful.

The top of the Surface is a 1-inch thick plate of glass with a frosted bezel and an active central area in rectangular shape, approximately 0.5m x 1m. It’s lit by a DLP projector housed in the box section beneath which works in conjunction with a series of infra red sensors to allow not just a multi-touch screen but a massively multi-touch screen.

What this means for your hands is that you’re not just limited to interaction with your thumb and forefinger but as many digits, limbs, shapes, coins, tennis rackets or whatever else you would care to place on the top. Just the screensaver of a pool of water, which you can ripple at will, was enough to get a whole room of cynical hacks grinning like children.

The question on everyone’s lips, though, was concerning the practical application of the thing. It’s an awesome bit of kit but what exactly is the point? That was most of the reason we were there today.

We know that the Surface is already used in a few hotels around the world for gambling and concierge purposes but it’s Tesco and Carphone Warehouse who’ve signed up over here. The latter’s application is a little bland to say the least with it simply displaying the different products that they offer which can be dragged about and clicked for more info, essentially.

Tesco, however, seems to have got the hang of the thing. They’ve used it to promote their wine club. The Surface works at its best when it can interact with objects that have RFID codes on them. So you’ll be able to slap your Club Card down on the the display, along with a few glasses of wine for each person, and the bottle itself, and have a tasting session where you can pull up all sorts of information on each vintage, rate them, drink them and then go and take the info onto your home PC where you can buy the plonk. The Surface is Wi-Fi and Bluetooth enabled but you can simply use the RFID numbers to call up the data elsewhere instead.

There’s still plenty of scope for far better uses of the machine but it’s simply the Natural User Interface, NUI as they call it, that’s enough for now. It’s incredibly responsive, fun and probably just the right level of sensitivity for it to be totally intuitive. If you thought the iPhone GUI was impressive then you ain’t seen nothing yet.