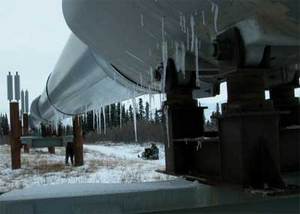 How far would you go out of your way to get cheap vodka? Personally, I might brave the Tesco value range, but I don’t think I’d ever go as far as the group of Russians and Estonians who created a massive pipeline across the Russian border to avoid import tax.

Vodka is incredibly cheap in Russia y’see. It’s the international version of Lidl when it comes to prices, but exporting the stuff is a different story. By constructing a massive 1.2 mile pipeline across the border, the gang were able to smuggle an amazing 1,638 gallons of the spirit before being caught.

There are eleven of them on trial at the moment, and they face a 5 year prison sentence if found guilty. I like to imagine they were caught when trying to use the pipe as the world’s best water slide.