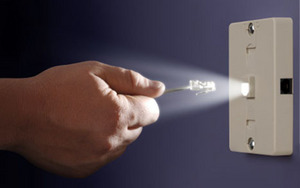 I remember when broadband first became available in the UK. I begged my parents to upgrade our slow, slow AOL dial-up internet access, so I could download bigger files and actually be competitive in online games (it was some years later when I discovered my poor performance was not solely attached to my slow connection). No avail, they were happy with AOL, which is a sentence you don’t see very often these days.

Regardless, they have (or had, rather – they got broadband pretty sharpish as soon as I’d left for university) quite a lot in common with 24% of the UK, who also don’t see the point in this high speed internet malarkey. That’s according to OFCOM’s CEO Ed Richards, who made the claim in a speech to the London School of Economics.

Doing some quick figures, he estimated that 40% of the UK is still in the technological dark ages of dial up or (gasp) without internet altogether. Yet, only 15% of this figure is thanks to expense with 55% not wanting it at all despite the exciting draw of YouTube and iPlayer.

No clue as to what the remaining 30% think. Perhaps they spoiled their ballot paper.

Still, this is a challenge that needs to be tackled, according to Richards, if the UK is to meet its target of Digital Britain, with everyone in the UK connected to broadband of a minimum 2Mbps speed. If the rest of the UK remains as stubbon as my parents were in the summer of 2001, they may face an uphill struggle.