The husband in question is John Best, 34, who, if you ever believe what the News of the World says, was using his laptop in bed – while his wife was asleep – to indulge in a bit of M2M action in Second Life.

He had a great excuse for doing it. He said “it wasn’t real life” which, to be fair, is 100% correct. Here’s the NotW’s superb visual representation of the story… 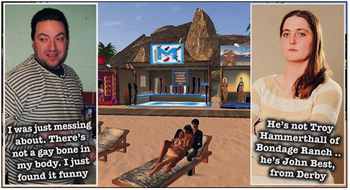 “I couldn’t sleep a wink the rest of the night wondering whether this meant he was betraying me or not – that he’d rather have gay sex on Second Life than have sex with me,” said pained Lisa, her pain probably lessened a bit by the money the newspaper’s paying for the story.

So, what do you think? Is having sex in Second Life cheating? And if you’re a man and doing it with a man, does it make you gay? Or doesn’t it count? Is it all just a game? I’ve played Mario quite a bit and it certainly hasn’t made me a plumber, for example.