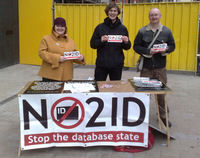 EDITOR’S NOTE: Please read this update while playing the theme tune from Benny Hill in the background.

The UK government may well be pushing ahead with its scheme to start rolling out ID cards to airport staff and other key workers in the security sector, but there’s one rather sizeable problem – the card readers. There aren’t any.

The Government apparently failed to budget for the thousands upon thousands of card readers that will be required to make the ID cards, like, actually work, which will inevitably add a couple of extra zeros to the end of the price of the controversial scheme.

Tech news site Silicon.com filed a question under the Freedom of Information Act, asking which police stations and customs points currently had had working card readers installed – to be told none did. “The biometrics are, in short, a waste of time,” Cambridge University security expert Richard Clayton said of the unintentionally hilarious situation.

Slaps on the forehead all round.

Related posts: £80 for a digital you | Oyster card hack released