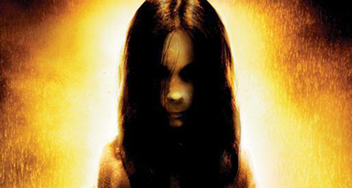 When Duncan and I were offered to take F.E.A.R. 2: Project Origin for a test drive, there was a bit of a scuffle over who should be the lucky one to review it. On the one hand, Duncan’s a much more experienced and discerning gamer than me. On the other, I’m his boss. So, instead we thought we’d do the only fair thing which was for both of us to test it from each of our points of view, each of our levels of expertise and each of our two different formats – PC and console.

Duncan on PC – the expert’s take

Let’s get one thing straight here, before we begin. I’m sure as hell not going to put full stops between the letters of F.E.A.R. every time I write it, so you’re just going to have to cope with me calling it FEAR. That alright with everyone? Okay, then we can begin.

FEAR 2 is the sequel to 2005’s rather successful military horror first-person-shooter FEAR, which ostensibly stands for “First Encounter Assault Recon”. The plot revolves around combatting an army of telepathically-controlled clone soldiers, created by a company called Armacham, and gone rogue.

Also central to the plot is a creepy little girl called Alma, who appears constantly in nightmarish visions and flashbacks throughout the game. She’s a strong part of the horrific sights that permeate the game, and are constantly making you jump as you look down and she’s stood next to you looking up at you with empty eyes. 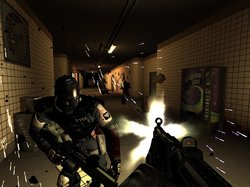 Gameplay-wise, this is a very standard corridor shooter. You pick up a variety of guns, ammo, healthpacks and armour, and are herded through a number of diverse locations, including a school and a hospital (for maximum creepiness). Along the way, clone soldiers and rather nastier mutants attack you. You kill them. You can do that in slow-motion if you like.

The AI is great. Soldiers will work together and shout commands, as well as spot you if you’re shining a flashlight right at them, unlike many other games. The developers have done a good job of making them realistic and believable, and they’ll constantly try and flank you, and flush you from cover with grenades.

But the main thing that differentiates FEAR from many other games is its use of psychological horror. This isn’t a game for kids – there’s a *lot* of blood. There’s little girls standing in pools of blood. There’s nasty things scrawled in blood on the walls. There’s limbs getting shot off, and soldiers exploding all over the place. Needless to say, it’s 18-rated.

Graphically, it’s excellent – lighting is used well, and textures never look tired. The visual distortion associated with the flashbacks really unnerves, with a flickering HUD often being the first sign that something nasty is about to go down. The locations all feel distinct, and level design is such that you’re rarely unclear of where you’re supposed to be going.

However, at its heart, this is still a game with its soul in 2004. There’s absolutely no innovation in this game that derives from the last few years. This game could have been made in 2005 – and effectively it was, as the only upgrades from the original game are the graphics, diverse environments and the AI.

It’s been ported to the PC very well, with no references to Xbox controllers that plague lazier developers that port their games to the PC. The textures look great at the PC’s scaled-up resolutions, too, and first-person shooters will always be controlled better with a mouse and keyboard than a gamepad.

In fact, the mouse and keyboard control make the slow-motion feature rather redundant. I found myself, after a few fights, either forgetting it was there or deliberately ignoring it because it made the game too easy. Sure, seeing bullets whizz past you is cool once or twice, but it sure gets old fast.

So in conclusion, FEAR 2 breaks absolutely no ground, remains doggedly faithful to its predecessor, and suffers a little from a slow-motion easy mode hangover from consoles. However what it does try and do – a linear, military-horror FPS – it executes exceptionally well with great atmoshere, AI, and graphics.

Single-player replayability is very limited, and I wasn’t able to try out any of the multiplayer features before its release, but there was nothing to suggest there’d be more on offer than any other FPS. If you’re happy to buy this, blast through it in a few sittings and never touch it again, then I can certainly recommend it as a fun way to spend a few evenings with the lights off.

But if you compare it to other big games released in the last eighteen months – Far Cry 2’s wide-open world, GTA IV’s incredible storytelling, or Left 4 Dead’s endlessly replayable multiplayer co-op action – it simply doesn’t stack up. When judged by today’s standards, I simply couldn’t recommend it over a large number of other games. For big fans of the first incarnation only.

Dan on the Xbox – the part-time gamer

Fear 2 reminds me of why I don’t play first person shooters any more, but before you stop reading, you should know that I still think it’s a good game.

It’s been years since I was a heavy gamer. A penchant for my dressing grown, microwaved food and an Everquest account a long time ago put an end to that one when I took a look around me for all of one second and realised why I didn’t have a career or much sex. But now, secure in both a relationship and a job – which actively encourages me to play games – I invested in an Xbox over Christmas, or more to the point, my girlfriend did for me. How’s that for self-sacrifice?

So, to pay back her kindness in some way, I decided to get her involved in my work and get her playing games with me. FEAR 2 was probably not the best choice here. The only first person shooters I ever really got comfortable with on consoles were the likes of Goldeneye and even for me the now standard two joystick control is still something I have to think about a little too much as I play. 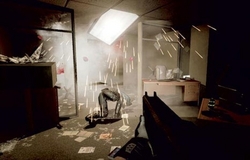 As for Jen, well, we spent about half an hour of her spinning around while looking at the floor or the sky before she packed it in and announced she was off to bed. Note to self: try Viva Pinata next time.

So, in a big cold room, alone, sitting cross legged on the floor, lit only by the flickering TV screen, I took control of whatever the name of this squaddy/special copper with a gun is called in FEAR 2 and walked into the dark hotel building of the first level of the game.

The minute I stepped into the broken lobby, blinking strip lights and blood spattered walls, I knew I’d a mistake. The problem is that I’m a total coward – well, at least when it comes to horror films. I like to think it’s because I have a vivid imagination and get far too involved, but I’m probably just a big girl’s blouse, and perhaps real reason I’d been keen to play this game with my girlfriend was because I knew I’d be scared if I did it on my own. And now here I was, scared, or at least scared for the impending scaring that was hanging over me, but then I suppose that’s how horror works. The trouble is, I just find it too horrible.

But, spurred on by you guys and in the knowledge that there was work to be done, I reloaded my assault rifle, checked my pistol and completely ignored what my virtual SWAT dude partner wanted me to do and made for the top floor to find a scientist who had some information/key/large weapon or whatever it is I needed to get to the next level.

So, what did I see on my way upstairs? Well, much of the same really – blood spatters, bad guys dressed up in Navy Seals-type wet suit outfits to shoot and a lot of mutilated bodies, some twitching. What you also get are flashbacks like the kind of thing from Silent Hill or the those scenes of what’s actually going on in ‘Nam while they’re all testing that battle drug in Jacob’s Ladder. Apologies for the spoiler anyone who hasn’t seen that film. It’s still worth watching, honest. 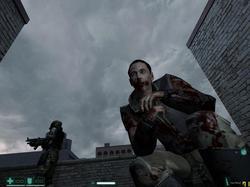 The Fear 2 flashbacks seem more like the after effects of some seriously bad energy left in rooms by some kind of horrible experiments that were done on a freaky looking girl who, I can only assume, is responsible for this utter carnage through which your character wades. I get the idea that it’s sort of not really her fault. She seems to be leading you somewhere, giving you clues but in the most disturbingly painful and orange lit way possible.

Now, the trouble with me and first person shooters is that all the spinning about starts to get to me and after about 40 minutes of playing I get the beginnings of that old familiar throb in my temples and the urge to put the controller down and start vomiting. But, for you guys, for work, I soldiered on through my impending headache, and I’ve got to say, some of that soldiering on was for the sake of the game too. It dragged me on.

Fear 2 was, it is, enjoyable. It looks great. The graphics are excellent with everything rendered near beautifully. I took the time to smash the windows of the penthouse suite and stand on the balcony to look over the twighlight of the grey city below. The music is well composed and every bit as chilling as it should be. There’s an excellent amount of interactivity of all the objects and scenery. You can shoot and destroy just about anything and best of all, you push all sorts of bits of furniture over and around to use as a shield in gun fights. The quite frightening part is that your enemies do as well, with really quite annoyingly good AI.

Perhaps the part that works the best is the game’s use of the dark. It actually makes you calibrate the light level before you start to make sure you’re nearly blind. 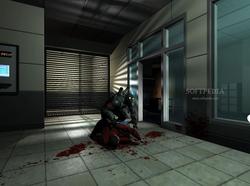 Much of the time is spent navigating dingy rooms by flashlight, each time you turn expecting to be face to face with freaky zombie flesh dripping monster screaming at you from point blank range, ripping into your chest while you fumble for the controls to eventually put it down having shoot over each of its shoulders first. At least that’s how I felt and after a couple of hours I just couldn’t take the constant suspense any more. Neither could my head take the spinning. It was time to stop and to be honest, I’m sure I’ll never play it again.

Fear 2 does everything it’s supposed to. It looks great, sounds fantastic and the gameplay is good but aside the things jumping out at you, there’s no real surprises. It’s a first person shooter. There are bad guys and you have to kill them with whichever interchangeable weapon you put in the foreground and that’s about it.

If you’re a fan of the genre, then I encourage you to give it a whirl. If not, don’t bother. For me, I’ll hold out for an RPG, or something nice and fluffy I can get the lady into as well.