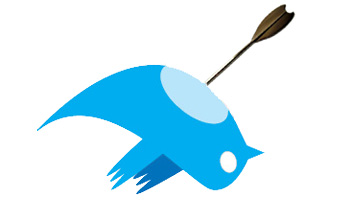 My first Twitter update was “Laughing at Katie’s birdwatching geekdom” on January 16th 2007, on the CatwalkQueen Twitter. I wasn’t an early adopter – Twitter launched in 2006 – but I have racked up a couple of thousand updates since that first one. The only thing that’s changed is that I’ve moved to my own account where my updates are slightly more frequent and a lot more irrelevant.

This week the anti-Twitter brigade have been out in full. Now that celebs like Stephen Fry, Phillip Schofield, Andi Peters and Jonathan Ross are spreading the word away from the geeks and the “social media experts” everyone’s jumping on the hate bandwagon. “Twitter is for Twits” read one (predictable) headline in the Telegraph. Congrats to Bryony Gordon (or her sub) for pissing off 6 million people before even starting the article. That’s a pretty good move, I bet the page views are through the roof.

The point is, while Twitter isn’t for everybody, it’s definitely not for twits, and I resent the fact people are getting paid to write articles where they moan about the fact it’s just a glorified facebook status update application. Talk about lack of research. In the right industries, it’s so much more than just a ‘what are you doing’ time waster.

Michael Litman got a job via Twitter. The Dogs Trust has managed to find new homes for dogs via informal Twitter chats. The British Red Cross currently has a team member visiting Sierra Leone and Liberia, where it’s not exactly easy to jump on the internet and send an email or file copy. She is updating Twitter via text message. Not only do her colleagues and family know she’s safe, but the public can see what she’s doing out there and how their donations are helping people.

My followers list – though relatively small at about 350 – is a goldmine for me. If I need a quick opinion for an article, I tweet a question and get a dozen answers within minutes. I’ve been able to speak to people via Twitter who’ve never answered my emails before. I follow everyone from those much-publicised celebrities to celebrities in my own little world. My friend Emma, who used to send out half a dozen emails a day with links to interesting stuff she’s found, now tweets her finds instead. Yesterday, when the company I work for had to make some (heartbreaking) redundancies, news was out in the industry within seconds, and all our Twitter pages were littered with @ replies and DMs from concerned parties. Twitter is the only place I still feel is full of nice, friendly people who genuinely want to share ideas, build relationships and help each other out.

Granted, Twitter is inherently an ego-driven tool for ego-driven people. But we’re journalists, bloggers, PRs and so on. We’re egotistical by nature (and often by necessity). When one of our own starts taking cheap shots at us for embracing a new communications tool, it just makes me think they’re scared of what it’ll mean for them.

As one very smart commenter on that Telegraph piece put it, “Twitter provides a place for people to write about what they are doing and what they think about things that matter to them. That so many people are taking the time to do so (and that so many people are reading the entries) must be of great concern to a journalist who gets paid to do the same thing.”

This post was creamed from the top of the personal blog of the fantastic Gemma Cartwright, Editor of Catwalk Queen and full time social mediette.

Keep up to date with all the news and reviews on Tech Digest – follow our Twitter news feed.