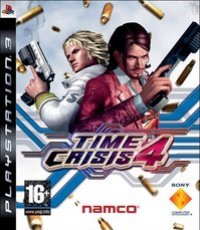 We’re not huge fans of Sony’s console division, but we wouldn’t go quite so far as to say that anyone who owns a PlayStation wants shooting – but that’s very nearly what happened to a couple of Danish gamers over the weekend.

A concerned neighbour heard gunshot sounds coming from their apartment – damn those cheap partition walls and declining modern building standards – and called the cops to investigate the possible slaughter going on inside flat 11b. Only there was no gun, or slaughter, only a game involving shooting being played way too loudly by a couple of kids…

The cops showed up expecting to walk into a bloody fire fight between two rival gangs of Nigerian drug lords, sealed off the area and sent in SWAT team blokes armed with proper shooters to make the poor children wee themselves in terror in front of their too-loud telly.

Nobody died in the end, but lots of time was wasted. We’d also imagine the kids were told to keep it down in future, and hopefully given a clip round the ear – if that sort of mild corporal punishment is still acceptable in mainland Europe.