It’s a murky Wednesday morning here in Vegas and I’m caffeined up to the nines to prevent an onset of jet lag. I’m sitting in the Sharp press conference, awaiting news of their lineup for 2009- will I be wowed or left wanting? Read on to find out…

20:33 Two new Blu-ray players are announced. They incorporate several features to improve the home experience, with lower power consumption and advanced audio clarity. They’ll cost from $229-$269, and have 2GB USB sticks to easily upload content. That’s all for now folks!

20:31 You can check web based content on the TV with an Ethernet cable. They’re now introducing 3 new providers for digital data for the TV’s. You get Navtec info, and plan your driving route whilst watching TV, Ball-point which gives you sports content and social networking features and also Screen Dream which supplies full HD 1080p images so you can use your TV as a picture frame, and fill it with images of flickering fires or Britney’s latest calendar shots. 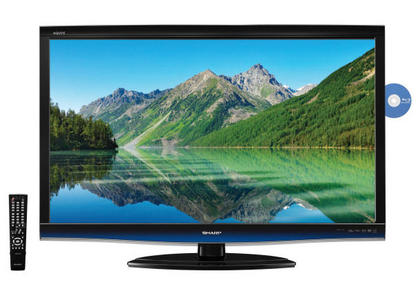 20:24
Finally we get to the product info! Bob Scaglioni, the Senior Vice President takes the stand to share the latest news. We’re going to get an all in one home theatre system, the Aquos BD series, which is the worlds first LCD TV with built in Blu-ray player.

They’ll offer motion advance technology for a clear crisp picture, a ten bit panel for compatibility and a dejudder to reduce background noise.There’s also two new technologies Aquos pure mode which adjusts display ratio based on the blu-ray disc, and a super panel which gives a smooth finish and enhances brightness and contrast. This will be available in February.

20:17
A product line that integrates Blu-ray technology into LCD Aquos TV’s and a home theatre audio system is due to be launched.

20:16
We get to the product plans for the coming year. Last year featured news on larger screen sizes and new markets- so what will we hear about this year?

20:11
Mike Trostii takes the stage. He mentions that he’s going to give us an overview of Sharp’s initiatives and talk about their environmental ideas. He says that consumers want to purchase from a reliable brand, and SHARP are a recognized name on the LCD market. He says that gaming consoles and Blu-ray products also contribute to LCD popularity.

20:10
He mentions the rise in OLED technology but maintains that LCD is still the best option for consumers.

20:06
To help development they’ve started building a new factory. It will be called the ‘Manufacturing complex for the 21st century’, and will also create solar cells.

20.03
Doug Koshima the CEO of Sharp says hello. He mentions the current economic uncertainty but says he is sure Sharp will come out ahead. He says that the LCD TV market has been affected by recent events but there is still room to grow- even though revenue is expected to fall 16%., Well that’s positive. He does say that by 2010 it will have recovered though.