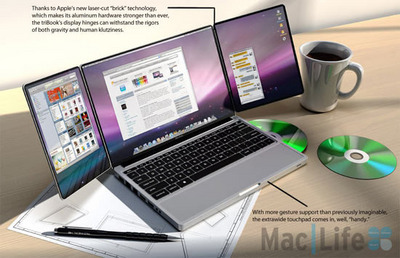 Portable computers are great but they’re not known for their screen real estate. The concept “triBook” based on an Apple notebook computer is a pretty impressive idea which solves that.

As the photo shows, it features a fairly standard notebook but with two additional side screens that fold out and can be angled to provide additional working/gaming space on each side of the main display. Together, they offer a total 21-inch diagonal widescreen.

There’s also a super-wide trackpad, just in case the standard one isn’t enough for you. The concept machine also contains an 8x SuperDrive, high quality hard drive, and a CPU with similar specifications to the standard MacBook Pro.

Whether anything like this would ever make it to market is another matter. I can imagine those screens getting easily damaged while on the move.