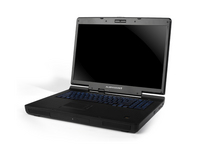 Less than 24 hours after we revealed Asus has come up with the amazing idea of making larger PCs that are significantly more powerful than the rubbish little netbooks we’re currently all dying under piles of, Alienware has jumped on the BIG BANDWAGON – revealing its awesome new M17 Extreme Gaming Notebook.

The M17 is Alienware’s first laptop to feature Intel’s mobile quad-core processor, with the range-topping Intel Core 2 Extreme QX9300 backed up by ATI’s CrossFireX dual-graphics technology and DDR3 memory. If money is literally no object due to your parents having invested heavily in property in the early 1970s, there’s room inside for two 5400rpm 500GB hard drives in RAID configuration for 1TB of storage space.

It’s incredibly well connected – an HDMI output will take care of HD business on a TV, its wi-fi goes all the way up to the 802.11n specification, there’s an optical out for hooking into an amplifier or just mucking about with the pretty red laser, FireWire, a card reader and an eSATA/USB Combo socket – the cool new external HD connection option.

The most shocking news is the price – Alienware’s managed to get entry level M17 models with 17″ 1920 x1200 screens, Core 2 Duos and 3GB of DDR3 RAM starting at less than a grand. A bit less than a grand – £999. All hail the rise of the big and powerful computer. This could catch on.

One thought on “EMERGING TREND: Large laptops that are powerful. Like the quad-core Alienware M17 Notebook”