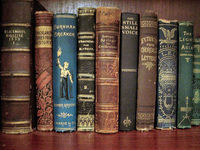 Vodafone has teamed up with GoSpoken.com to sell books via phones, through Vodafone Books on Mobile. It will offer books for between £5 and £15, which seems quite a lot, to be honest, seeing as you’re basically paying to download an audio file.

Vodafone reckons that, if you’re using an HSDPA network, a three-hour audio book will download in three minutes. Then you’ll have £5 or £15 or maybe £7.99 added to your bill, as that’s what it’s all about.

ABOUT BOOKS:
Books are collections of words that tell a story. Some stories are true, others complete works of fiction. The most popular books contain photographs and depict fantastic tales of aliens and robots from distant worlds, whereas other, less interesting books mainly feature politicians talking about what happened to Michael Heseltine in 1986.

Books fell out of favour in the early 1970s when television started being broadcast in colour.