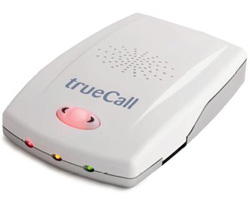 Telemarketers, silent calls generated by overzealous diallers, over-exuberant automated American-accented robots, the slightly weird relative that you really don’t like talking to on the phone… they’re all reasons to get hold of trueCall, which is supposed to do a pretty good job of screening or zapping unwanted callers.

The trueCall screens phone numbers, letting through ones it recognises on its “star list”, zapping those on the blacklist, and asking unrecognised callers to leave a message.

The device is fairly rudimentary at present, but in future it could download a list of blacklisted numbers from a centrally-managed database, though there are currently some unspecified legal issues about doing this — probably the nuisance callers whinging about their human right to annoy the hell out of the British public.

The solution isn’t cheap — £99.99 — but if the Telephone Preference Service isn’t cutting it, it’s a decent enough gizmo.