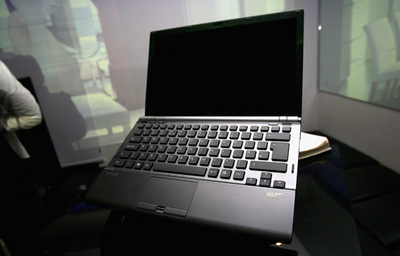 Sony has launched a limited edition 007 Vaio Z notebook in a good old fashioned milking of their sponsorship of the new James Bond film, the Quantum of Solace, which hits the screens at the end of this month.

Luckily, the Vaio Z is a rather smashing laptop, so I’ve got no problem if they release it a thousand times over for a million different reasons. The Bond Z Series is essentially the same creature with the addition of a Blu-ray drive and, of course, the secret agent logos all over the 1.5kg carbon-fibre chassis.

Somehow I doubt this is how M16 laptops actually look. Theirs are much easier to tell. They’re the ones left abandoned in British Rail carriages.

It is, however, rather difficult to see what’s so special about this limited edition ‘top with the image with which I’ve been supplied. I am assured, though, that the other side is a lot more exciting.

If you thought the Z series was expensive enough then prepare to choke on your mid-morning cuppa. The Bond Vaio will be available for a palm-blistering £2,999 and you’ve got until 31st October to mug enough old ladies for the cash. Only 700 of them will be released into the wild and you can get hold of them from Sony stores provided you don’t get taken out by SPECTOR before you get there.

P.S. – Big kudos prize if you can tell me what SPECTOR stands for.

P.P.S. – Even bigger kudos prize if you didn’t have to look it up.